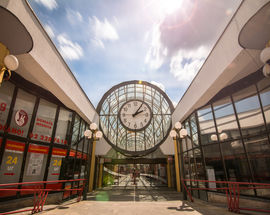 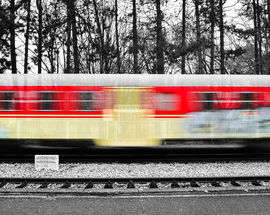 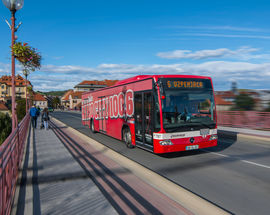 Maribor is the main transport hub for the eastern half of Slovenia, and as such is well-connected by public transport to the rest of country, in addition to Austria, Hungary and Croatia. The main bus and train stations are only a couple hundred metres apart on the eastern edge of the city centre, and well within walking distance of most centrally-located hotels, however, there should be taxis waiting out front if you don’t feel like dragging your luggage through an unfamiliar city.

While Maribor has a domestic airport, it currently does not have many flight connections. That shouldn’t deter you from visiting Slovenia’s second largest city though, as it is close to a couple of larger airports, all a relatively short drives away. Ljubljana’s Jože Pučnik’s Airport is 150km away (amounting to less than an hour and a half’s drive), Zagreb Airport (Croatia) is 130km away (also less than a hour and a half’s drive) and Austria’s Graz Airport being a good half an hour drive at 60km away.

/maribor/arriving-by-car_151238v
Maribor’s public transportation system is reliable enough that a car is by no means needed. This even extends to visiting the Pohorje Mountains that are a …
see more
Arriving by Plane

/maribor/arriving-by-plane_151239v
Maribor’s tiny airport isn’t exactly a hub of activity, but the number of flights arriving and departing from it has increased in the past 12 months with the …
see more
Arriving by Train

/maribor/arriving-by-train_151240v
Although the train station has quite a bit of traffic coming and going in all directions, it doesn’t have much in the way of facilities. If you’re in need of …
see more
Arriving by Bus

/maribor/arrving-by-bus_151237v
The main bus station is either an architectural icon or eyesore depending on one’s taste, but either way, it’s centrally located and has a range of facilities …
see more
Car rental

Eve Lovše 19
/maribor/atet_150771v
Atet offers some of the lowest priced car rentals in Slovenia, with further discounts and free extras for Erasmus students and those arriving on flights with …
see more
Arriving by Bus

Meljska cesta 97
/maribor/arriva_150763v
One of the largest bus companies in Slovenia, Arriva ensures you get to where you want to need to go on time in both comfort and safety. They provide …
see more
Car rental

Partizanska cesta 6
/maribor/avantcar_150769v
Winners of our Best Car Rental poll for 2014, Avant offer vehicles of all shapes and sizes, with something to fit the needs of any prospective driver. Only the …
see more
Bikes

Partizanska cesta 6
/maribor/bike-rentals_150767v
If you want to explore Maribor, but don’t want to go by foot, why not try Maribor’s Tourist Information Center’s Bike Rental service. They have a total of 10 …
see more
Arriving by Bus