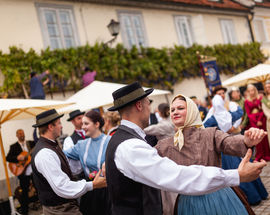 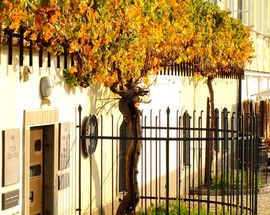 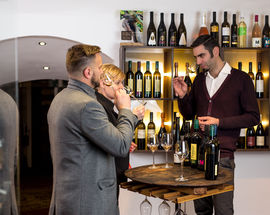 In the heart of the old city centre, on Lent, the oldest vine in the world still grows in front of the Old Vine House. The confirmed age of this “Žametovka” or “Modra Kavčina” vine is over 400 years, which won it a place in the Guinness Book of Records as the oldest noble vine in the world still bearing grapes. The Old Vine is a symbol of the rich wine culture of Maribor, Styria, and all of Slovenia.

The Old Vine was planted towards the end of the Middle Ages, when Maribor was facing Ottoman invasion. It survived the furious fights between the invaders and the defenders of the city, as the Old Vine House used to be a part of the city wall. The vine was not harmed by the fires at that time, which occurred frequently due to wooden roof structures and straw coverings, nor by the vine lice that destroyed most of the other vines. Even though the bombardment of the Allied forces during World War II partly destroyed the city wall, this resilient plant survived unscathed till nowadays. Moreover, today, the scions of the Old Vine grow on almost all continents and in several places in Slovenia.

You are kindly welcome to visit the Old Vine House, a temple of wine tradition and culture of Maribor, Styria, and Slovenia, offering guided tours of rich wine patrimony and other exhibits. Don`t miss it`s extraordinary wine bar with excellent regional wines offering an in-depth exploration into a Maribor area vineyard’s atmosphere by experienced sommeliers.