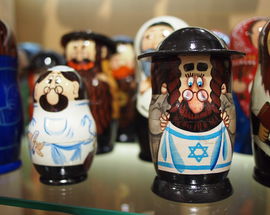 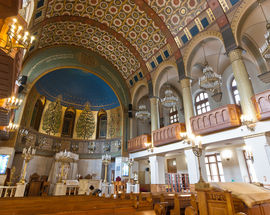 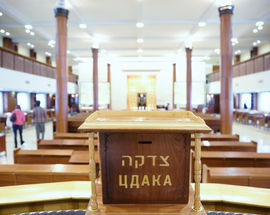 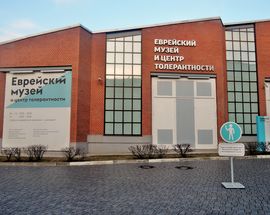 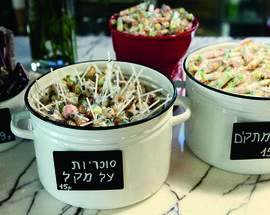 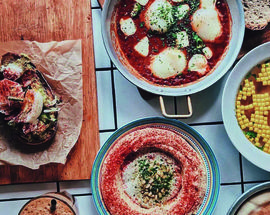 The Jewish Museum and Tolerance Center
The pride and joy of the Jewish community – and indeed of the entire city – is the Jewish Museum and Tolerance Center. Opened back in 2012 in the building of the Bakhmetevsky Bus Garage (the monument of Constructivism designed by Konstantin Melnikov and Vladimir Shukhov), the center has by now become the venue for the most high-tech multimedia museum in Russia.
Meeting the requirements of the modern culture and society, the Jewish Museum and Tolerance Center represents a cultural and educational complex with its permanent exposition. Exhibition, research, educational, children’s and Tolerance centers function as well.
The permanent exposition presents the history of Russia starting from the period of Catherine II the Great down to our days with the help of examples of the culture and everyday life of the Jewish people. Unlike many traditional historical museums, the Jewish Museum and Tolerance Center is interactive. Twelve themed halls designed by the leading company in the sphere of exhibition design – Ralph Appelbaum Associates – are equipped with panoramic cinemas, interactive screens, audio-visual installations created with the use of unique photo- and video-archives, documents and interviews. Major exhibitions introducing the main movements and names in fine arts are also held in the Museum. The catalogues from these exhibitions, exclusive art books, modern literature and souvenirs, designer jewelry and judaica can be found in the museum shop.
Thanks to different research activities, educational programs for children and grown-ups, large-scale exhibition projects, and a wide range of excursions the Jewish Museum and Tolerance Center represents a multifunctional cultural institution opened for everyone. Last year, the Tolerance Center at the Moscow Jewish Museum was even awarded the Madanjit Singh Prize for the promotion of tolerance and non-violence. The center was recognized for its wide range of activities, including research and educational programs promoting dialogue between religions and worldviews, with a particular focus on youth.
Independently of the event schedule, all those who wish can get acquainted with the books and albums about the Soviet Avant-Garde thanks to the unique book collection of the Schneerson library. Any visitor who has a library card of the Russian State Library can access it; it unites several museum projects which focus on studying the Jewish book heritage and popularization of knowledge about the Jewish writing culture.

Synagogues
Synagogue on Bolshaya Bronnaya Street
The synagogue was built as a private synagogue by pre-revolutionary millionaire Lazar Solomonovich Polyakov. Privately constructed and owned synagogues that served congregations were a familiar tradition in many parts of Europe; in the Russian Empire, great magnates could sometimes get permission to erect private synagogues outside of the Pale of settlement when congregations could not.
The pre-war rabbi was executed by the Soviet government in 1937 and the building was converted into a trade union meeting hall. In 1991, the building was transferred to Chabad Lubavich. In 2004, a renovation was completed and nowadays this synagogue is not just a temple, but also a religious center for the entire community. The building includes classrooms, a bookstore, a lecture hall, mikvah and kosher restaurant that has a wonderful rooftop terrace in the warmer months.

Holocaust Memorial Synagogue
The Holocaust Memorial Synagogue is a synagogue located on Poklonnaya Hill in Moscow’s Victory Park. It was built in 1998 to complement an Orthodox church and a mosque that are also part of the outdoor museum dedicated to the Soviet victory in World War II.
The building of the Temple of the Memory on Poklonnaya Gora, a flat hill in the West of Moscow, between the Setun River and another hill, was constructed and opened on September 1998 in then president Boris Yeltsin's presence.
The architect in charge of the Temple of Memory was Moshe Zarhy (Zarhy Architects) from Israel. In the Holocaust Memorial Synagogue there is a hall with a balcony, offices for the rabbi and a library. The building is also used as a museum and a venue for an exhibition about the history of the Jewish people and the Holocaust

If you're pressed for time we'd recommend you at least visit the Old Choral Synagogue. It's the oldest Moscow synagogue, is a simply stunning building and it's very close to Red Square. This synagogue recently celebrated its 100-year anniversary. It is a very impressive building, constructed by renowned Moscow architect Roman Klein. This synagogue was the only one that continued to operate throughout the Soviet years.

The Maryina Roshcha Synagogue was established in 1925 at Vtoroy Vysheslavtsev and, nowadays, is also called "the Second Moscow synagogue" (after the Moscow Choral Synagogue). The building, completed in 1996, replaced the one destroyed by a fire in 1993. Since 2000 it's also a Chabad-Lubavitch Community Center. There is also a smaller synagogue and community center on L’va Tolstogo Street (in the Khamovniki District).

2-oy Vasheslavtsev per. 5a
/moscow/the-international-jewish-community-center_152767v
Russian speaking Jews have a reasonably wide range of centers and synagogues where they can take part in activities related to their faith. Thanks to the hard …
see more
Jewish Moscow

Pavlovskaya ul. 6
/moscow/the-shalom-moscow-jewish-theater_152770v
Currently, the Shalom Theater is the only Jewish theater in Russia. It is very popular with the public and enjoys notable success abroad, especially in Israel …
see more
Jewish

Synagogue na Bolshoy Bronnoy, Bol. Bronnaya ul. 6 bldg.3
/moscow/jerusalem_76188v
Jerusalem is a restaurant on the rooftop of the synagogue on Bolshaya Bronnaya Street and is probably the favorite spot of Moscow’s older and wealthier Jewish …
see more