Alcohol
The three most popular alcoholic drinks in Macedonia, are rakija, a fruit brandy made almost exclusively from grapes and that often precedes lunch and is an indispensable accompaniment at almost all celebrations, locally produced wine (vino), which is of exceptionally good quality and beer (pivo), of which the most widespread brands are Skopsko, the Skopje-brewed market leader that also produces a rare dark beer, and Zlaten Dab, which is brewed in Prilep. Craft beer is becoming increasingly popular. Although we didn’t see anything on display the last time we were drinking in Ohrid.

Electricity
The electricity in Macedonia is 220-240 volts AC, 50Hz and flows out of standard European round pin sockets.

Floors
The Macedonians use the British floor numbering system, meaning if you enter a building at ground level, the first floor is the one above you.

Kej Marsal Tito
The main lakeside street running the length of Ohrid where many of the hotels we list are located is officially know as Kej Makedonija, a fact that many of the hotel owners choose to ignore and who continue to refer to as Kej Marsal Tito in memory of the former dictator. This is common practice throughout Macedonia and as charming as it may or may not be, it can be extremely frustrating when you’re trying to find a place.

Health & Safety
Macedonia is safer than many West European countries with violent crime, including attacks against foreigners, being extremely rare. Do however exercise caution, beware of pickpockets and bag-snatchers in crowded areas, think twice about wandering about on your own in the middle of the night (especially if you’ve been drinking) and be careful who you hand your credit card to when buying things with plastic. Thanks to the abundance of mountains and fresh springs in the country, the tap water is absolutely fine to drink.

LGBT Macedonia
Same-sex relationships are legal in Macedonia and homosexuality was decriminalised in 1996 as a precondition for joining the Council of Europe. Macedonian law defines marriage as a union between a man and a woman and a huge percentage of Macedonians still harbour homophobic sentiments due to a general lack of open debate on the subject. There’s no LGBT scene in Ohrid as such and couples are encouraged to keep their canoodling confined to their hotel rooms. Several LGBT rights organisations are active in the country, and all maintain useful websites where more information and/or contacts can be found.

Local time
Macedonia is in the Central European Time (CET) zone at GMT+1hr. When it’s 12:00 in Skopje it’s 06:00 in New York, 11:00 in London and 19:00 in Tokyo. Central European Summer Time (CEST, GMT+2hrs) falls between the last Sundays of March and October respectively.

Money & Costs
The Macedonian denar (written as den in this guide and MKD in many other places) is a non-convertible currency that mildly fluctuates around a stable conversion rate of about 61 den to €1. Most currency comes in the form of banknotes, with some coins also in circulation. Hotel, restaurant and transport prices are considerably lower than in the West, a situation that along with the introduction of low cost flights in and out of the country makes visiting Macedonia an increasingly attractive proposition. Several ATMs can be found in the centre of Ohrid and paying with plastic is the norm in most places in town these days, although it’s always worth carrying some spare cash for emergencies.

Religion
The majority of people who identify themselves as ethnic Macedonians belong to one degree or another to the Eastern Orthodox faith, accounting for some 67 percent of the country’s believers. The other major religion, practiced almost exclusively by the Albanian minority, is Islam, which accounts for a further 30 percent. The remaining three percent are composed mainly of Catholics and a handful of others. Lydia of Thyatira, the first European to convert to Christianity in 51AD, is generally portrayed as being Greek, although many people, including not surprisingly a considerable amount of the local population, consider her to be Macedonian. Trips to see the many beautiful Christian and Muslim houses of worship in Macedonia feature as one of the main highlights of any visit to the country.

Smoking
Still very much a national pastime, smoking in Macedonia is yet to witness the kind of backlash that’s taken place in the rest of Europe over the last decade or so. Although bars and restaurants now come with designated non-smoking areas, there’s still a long way to go before any hope of a total ban. Macedonia is a major grower and producer of Turkish tobacco, especially in the countryside around Prilep. A packet of Marlboro currently retails at around 120den, or €2.

When to go
Macedonia, a small country by anyone’s standards, can claim a total of three very different climates, namely changed Mediterranean, mountainous and mildly continental. Average temperatures vary considerably depending on where you are, with much of the country receiving blissfully long and hot summers with relatively mild and wet winters and other parts such as the mountains suffering from long snowy winters and the briefest of chilly summers. At an altitude of  693m, Ohrid is a particularly welcoming place during the height of the summer and is known for its cool summer evenings. If you’re not coming to ski or lay on a sun bed, we recommend visiting in late May when the spring flowers are in full bloom and the temperature is pleasantly warm.

Things to do in Skopje and Ohrid feature
Top attractions in Ohrid feature
Macedonian Food: Shopska Salad feature
see more
Take your guide with you Download a pdf 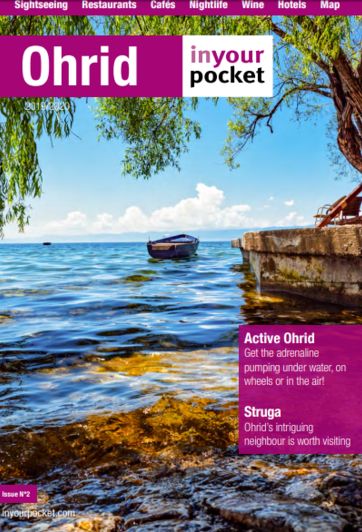