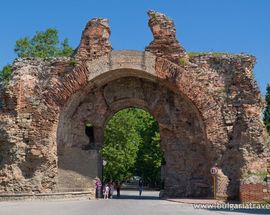 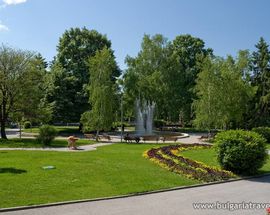 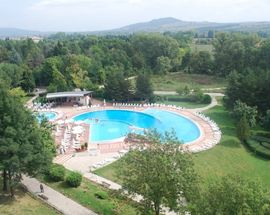 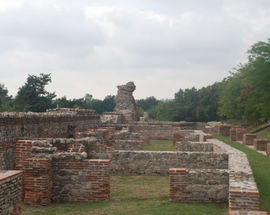 This town on the Thracian plain, at the start of the Rose Valley and less than an hour's drive north of Plovdiv, has been a spa centre since antiquity and deserves a visit not just for its 22 mineral springs, some of which are used to fill hot pools for bathing, but also for the ancient fortress and Roman remains.
The town’s hiatus was under Roman rule, when it was known as Diocletianopolis after the Emperor Diocletian and was an important regional town.You can walk along and explore  bits of fortress, in particular the 'camel' gate, which is almost intact, and walk around the wall. You can also go downhill from there to older ruins and ancient burial mounds. The central alley, leading past the old baths, has a Roman spa town feel to it. Many of the buildings have been renovated and have been restored to their original beauty.

Once dominated by rundown state sanatoriums, the spa resort has now become an attractive getaway for Bulgarians from all over the country, and there is a good selection of classy hotels with their own pools and spa centres.
The mineral waters is at a natural temperature around 45 degrees centigrade and is suitable for drinking.  You will find free flowing taps dotted around the town. The mineral consistency of the waters is said to be beneficial for the following health issues; urological, gastrointestinal, musculoskeletal , peripheral nervous system, metabolic and gynaecological.

From Hissarya you can take a trip to Starosel approximately 30 km away and visit the Thracian temple that was unearthed recently, or travel the Valley of the Roses (best time early June) aka The Valley of the Thracian Kings with many newly uncovered splendid tombs.
Hissarya is also referred to as Hisarya, Hisar and  Hissar which comes from the Arabic word for fortress.
Photos thanks to Bulgaria Wine Tours and Bulgariatravel.org