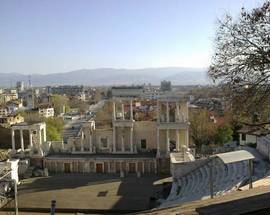 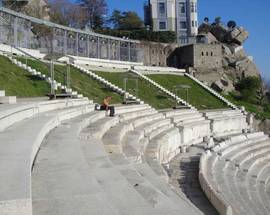 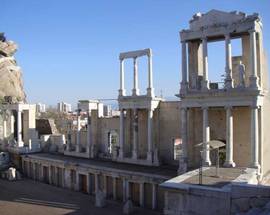 Plovdiv's ancient Roman Theatre is a sight to behold. Approaching it from one of the narrow cobbled streets of the Old Town, what strikes you first as you step onto TaksimTepe (hill) is the uninterrupted view of the city below you and the Rhodope mountains in the distance. What strikes you second is the stunningly intact theatre falling away in front of you, its rows of seats staggering down the hillside and pieces of the far wall broken off, as if the columns had just fallen backwards off the hill. You can go inside and walk around for a modest fee, though beware that the steps are steep, many of them are worn away and there are very few handrails. It is possible, though, to pick out the new steps among them and carefully work your way down to the stage - now wooden - which hosts concerts and opera performances in the summer months.

The silence is astounding, giving you every opportunity to dwell on what this place must have meant to the ancient peoples who came to watch theatrical performances here. Built in 1st century AD, the theatre can seat 7000. Damaged during an invasion by Attila the Hun, and covered by centuries of buildings, it was only rediscovered and excavated in 1972 when construction on the tunnel below began.

A recently found and deciphered inscription on a monumental pedestal reveals that the theatre was constructed at the end of the Ist century A.D., when Philippololis was under the rule of Titus Flavius Cotis – an heir of a Thracian Royal Dynasty, the high priest of the Thracian province, representative of the Metropolitan Court of Justice.

An outdoor cafe has tables running along the fence on the street above, giving you a great excuse to have a break and gaze upon the magnificent view.
Show on map