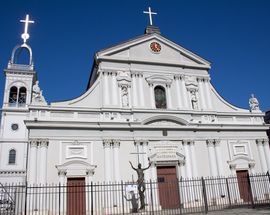 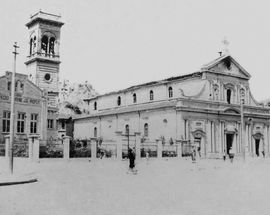 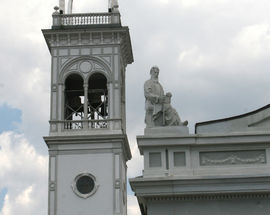 Constructed in the 1850s, it had the first organ in Bulgaria. A fire severely damaged it in 1931 and destroyed the wood-carved ceiling. Shortly afterwards it was reconstructed by architect Kamen Petkov - the master of the Secession, who built over 800 of the most beautiful buildings in Plovdiv, such as the Tobacco Warehouses and the Bulgarian National Bank.
Architecturally it features an eclectic combination of Neo-classicism and Neo-baroque. The belfry was built in 1898 and equipped with 5 bells cast in Bochum, Germany, a gift from Pope Leo XIII. The frescos are by Krastyo Stamatov. The cathedral was once again inaugurated on 8th May 1932. A new 12-stop pipe organ was installed in 1991.