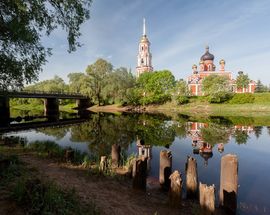 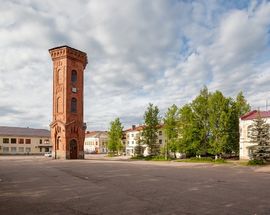 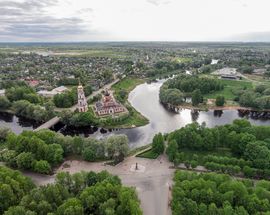 Old Russian legend tells us of two brothers Rus and Sloven, who, four millennia ago, set off from the Black Sea to found a new homeland; Sloven created Veliky Novgorod, whilst Rus's town on the other side of Lake Ilmen went on to become Staraya Russa. The town, of course, isn't quite that old, having been founded somewhere around the 10th century, but is nonetheless one of Russia's oldest cities. Its architecture reflects its heydays as a major player in the salt trade and wealthy city of the Novgorod Republic, and again as a fashionable 19th century spa resort. In tune with urbanisation in general, the town's population is shrinking; but this is a receding tide that Staraya Russa has seen more than once before (its population once shrank to 38) and one that may yet turn, whilst in the meantime the town is a sleepy slice of Russia's history.

It has always attracted guests from far and wide. Sometimes these were less than welcome visitors, in the form of Swedish armies, marauding gangs in the Time of Troubles before the Romanovs took power, or Hitler's forces who nearly razed the city to the ground. In other more peaceful times of the the city these were aristocrats come to drink the town's rejuvenating spring water. Today, it draws in visitors who seek to trace the footsteps of one of Russia's greatest writers and perhaps the one who made the greatest impression abroad, Fyodor Mikhailovich Dostoevsky. On the recommendation of friends he and his wife chose Staraya Russa as the spot for their summer  dacha. Here, Dostoevsky could escape the suffocating streets of St. Petersburg and the temptation to gamble, an addiction that had drained his finances and health.

Both of them soon fell in love with the spot: the quiet streets, rivers and meadows gave the writer the space he needed to write, whilst the town's buildings and characters served as inspiration. His masterpiece The Brothers Karamazov was written in their small house here and set in an almost identical fictional town. On the opposite bank from the Dostoevskys' house is a building known as 'Grushenka's House', so named after the character in the Brothers Karamazov, for whom the house's former occupant Agrippina Menshova supposedly served as a prototype. Though today it is still a private house, postmen will still bring here envelopes addressed to 'Grushenka's House'. Dostoevsky himself was deeply religious and the church he attended here, the Grigoryevsky church, is just one of a number of charming medieval churches of all shapes and colours that the town can boast. The town's Spaso-Preobrazhensky Monastery also has a few fine examples of small wooden-domed churches. The surrounding countryside, so far removed from busy St. Petersburg, moved Dostoevsky - he gives Ivan Karamazov the line, "I love the sticky leaves in spring, the blue sky - that’s all it is. It’s not a matter of intellect or logic, it’s loving with one’s inside, with one’s stomach".

Getting there from St. Petersburg:

There are numerous buses (journey takes 5 hours) a day leaving from the bus station at Obvodnogo kan. 36 (metro Obvodny kanal) at 18:30 (destination Staraya Russa) and at 07:55 and 13:45 (destination Parfino).

Getting there from Veliky Novgorod:
There are numerous buses a day leaving from the central bus station at Oktyabrskaya ul. 1.

Staraya Russa
/veliky-novgorod/Staraya-Russa_115494v
The town having been founded somewhere around the 10th century, but is nonetheless one of Russia's oldest cities. Its architecture reflects its heydays as a …
see more