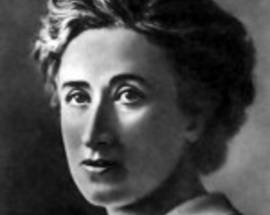 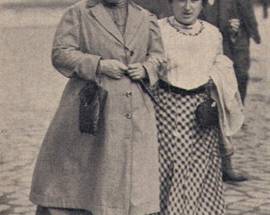 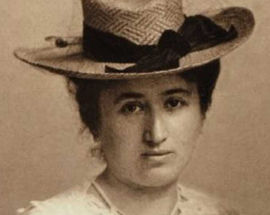 While the name sounds like that of a soap opera character or possibly a romance novel heroine, Poland’s Rosa Luxemburg was not a fictional figure – though her story as a noted revolutionary socialist is just as dramatic. Born in the southern city of Zamość (which was then controlled by Russia) in 1871, Luxemburg was the fifth child born to a Polish-Jewish family that eventually moved to the capital of Warsaw. There Luxemburg attended school and got her first taste of political activity by becoming involved in the left-wing Proletariat party, a short-lived socialist political party that was essentially dissolved after most of its members were executed or imprisoned around 1886. Luxemburg fled to Switzerland in 1889 to escape persecution for her beliefs and enrolled in Zurich University, where she met Leo Jogiches – a fellow student and the man who would be her romantic and political partner for the rest of her life.

Together the duo founded the Social Democratic Party of the Kingdom of Poland and created a newspaper, Sprawa Robotnicza (The Worker’s Cause) to oppose the policies of the Polish Socialist Party. Luxemburg maintained the position that an independent Poland would only come about through socialist revolution, a position she held from across the border in Germany (by 1898 Luxemburg had married Gustav Lubeck in order to gain German citizenship and settled in Berlin). In Germany Luxemburg was an active participant in the Social Democratic Party of Germany (SPD) and accurately foresaw the upcoming war, condemning Germany’s militarization and writing analyses about European socio-economic issues as well as speaking publicly to workers about solidarity in the event of war.

Despite Luxemburg’s efforts to unite workers into a strike against war, when the Balkans erupted in 1914 there was no such strike, and the SPD itself voted to support financing the war and refraining from strikes throughout its duration. Not one to take things lying down, Luxemburg promptly organised anti-war demonstrations and earned herself a year in prison for “inciting to disobedience against the authorities’ law and order.” Shortly thereafter Luxemburg and like-minded friends, including Karl Liebknecht, founded the Spartacus League which generated anti-war leaflets and continued to encourage workers to strike against the war. Those efforts landed Luxemburg back in prison once again, this time for a 2.5 year stretch beginning in 1916.

Upon her release in November 1918 Luxemburg and Liebknecht immediately regrouped the Spartacus League and created the Red Flag newspaper to continue pressing their ideas – which now included amnesty for political prisoners and an end to capital punishment. The following month saw the duo found the Communist Party of Germany amidst the country’s post-war revolution, though the revolution’s second wave would prove deadly for both Luxemburg and Liebknecht. While Luxemburg herself opposed the revolution’s violent grab at power, the Red Flag backed the rebels and both Luxemburg and Liebknecht were seized, questioned and summarily executed as a result. Luxemburg’s corpse was thrown into the Landwehr Canal, where it went undiscovered for four months.

Despite her untimely death Luxemburg left a vast legacy of ideas and writings, with the term “Luxemburgism” even used to describe a specific revolutionary theory within Marxism that is based on her work. And while there are currently no monuments or memorials to the revolutionary in Poland, Berlin sports a U-Bahn station named in her honour (Rosa-Luxemburg-Platz) and a memorial in the city’s Tiergarten marking the spot where her body was tossed in the canal.