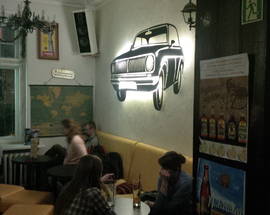 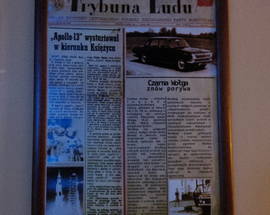 Every country has a bogeyman figure which parents use to keep their kids in line. But while most are the stuff of fairy tales, the Polish version actually has a basis in fact. Though the tale has been largely consigned to history these days, the mere mention of the 'Czarna Wolga' (Black Wolga) still prompts shudders and eerie stories from those who grew up in Poland in the decades after the war.

The legend of the black Wolga or ‘Czarna Wolga’ has the Soviet-built limousine as its main protagonist. In the 50s, 60s, and even into the 70s, a car of this type was rumoured to cruise eastern bloc countries abducting children for their blood and organs which would be sold to rich westerners. Parents would warn their children playing outside to beware and that if they were not careful they would be swept off and never seen again. Nice image.

Whether any children were actually snatched is doubtful and probably had more to do with parents using it as a threat to make kids behave. But the legend was built on some truth. After the war the Polish authorities drove the cars of their masters - Wolgas. In the immediate post-war period the Communist authorities consolidated control and perceived enemies of the state, such as those who continued to resist what they saw as Soviet occupation, would be rounded up for questioning and often worse. While people didn't disappear when they saw a Wolga those people who did disappear did so in a Wolga. The sight of one appearing in your district was ominous and struck fear into the residents. As a number of older Poles have told us, for those living in the country - where the sight of any car was once rare - the very sound of a car’s engine could provoke panic.

By the time the generation of kids growing up after the war had children of their own, the perceived danger of the appearance of a Wolga had morphed into a parental admonishment brandished to make their children behave. So it seems that while the lasting legend probably has little truth, the Wolga certainly represented an object Poles had every right to fear at one time.