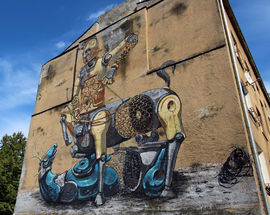 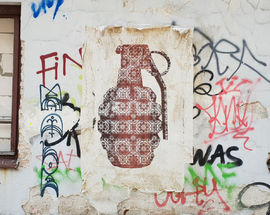 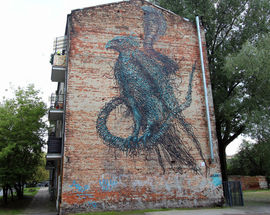 Poland has a long, lauded tradition of graphic art, with large-scale Polish advertising and poster design known internationally for their high artistic quality. The art form actually flourished under communism and can still be commonly seen in the stylish high-minded aesthetics of posters all over the country’s walls and signboards. With such a knack for graphics, it stands to reason that Poles would have a penchant for street graphics as well. And they do. In Warsaw, as in other cities around PL, street art is currently going through a tidal wave of popularity (you can read more about Warsaw Street Art on our site). In the last few years new street murals have become a common sight around Warsaw. More restaurants and businesses are turning to street artists to playfully embellish their public spaces, and city authorities have even taken the surprising step of sponsoring some large scale murals around the city. In fact, the emergence of street art as a growing and legitimised artistic discipline has created an interesting dichotomy in Warsaw’s urban landscape between both sanctioned and unsanctioned works of ‘graffiti art’ and the prolific gang signs, slurs and football-related graffiti that city paint crews have targeted in their war on ‘vandalism.’

Each summer the Street Art Doping Festival invites Europe's top street artists to leave their large scale marks around town. Examples of their murals can be seen at ul. Racławicka 17 (F-15), ul. Rakowiecka 2C (G-13) and ul. Bliska 23 (in Praga Południe) respectively, also, if you stick to the length of ul. Stalowa, to your left and right, you'll frequently see murals. Home-grown work can also be seen all around the city, with the more down at heel districts of Praga and Wola being particularly well represented. Keep your eyes open for the projects of sweetly subversive local heroine NeSpoon; her stencil series - based on motifs of traditional Polish lace designs - is often seen in the unlikeliest of places. Similar works by local artists SC Szyman and Simpson can also be found around the city.

If it's something you're interested in, we highly recommend you check out some street art in Warsaw, but be quick, one of our favourite murals of a castle in the sky, once located on ul. Mińska 12 (Praga Południe) is no more - gone with the building it was painted on!

At any rate, those with an interest in street art will have little trouble tracking it down in Warsaw, and we’re making it even easier. In addition to cataloguing and GPSing street art addresses throughout the city centre below, we’ve also marked each place with a spray can symbol on the maps in the back of our print guide, so you can literally use them to give yourself a tour of Warsaw’s urban art. We’ve also put it all online with GPS coordinates so that your smartphone can do the work for you. We encourage you to do just that, and check out some of Warsaw’s alternative art.

ul. Lipowa 3
/warsaw/mural-of-maria-sklodowska-curie_103261v
If you’ve always pictured Maria Skłodowska-Curie as a bit of a scientific bad-ass then you’ll appreciate the mural of her on ul. Lipowa 3 near Warsaw …
see more
Murals

The Royal Route in Warsaw feature
Katyń: More than a Museum feature
Warsaw Pass feature
see more
Take your guide with you Download a pdf