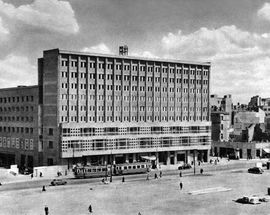 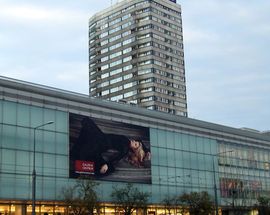 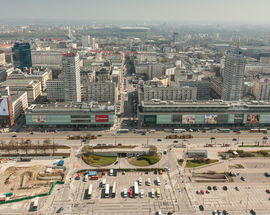 Reeling from near total annihilation the post-war years saw Warsaw emerge as Europe’s biggest brickyard as it struggled to rebuild itself from the ashes. Initially the buzzword for architects in the region was Socialist Realism, a severe style following strict guidelines from a Soviet masterplan. The death of Stalin in 1953 changed all that and architects looked to the west for inspiration, a disastrous move that saw all manner of brutalist monstrosities rise from the ruins. The competition in Warsaw is fierce, but probably nastiest of the lot is the development dubbed ‘the Eastern Wall’ (Ściana Wschodnia), a collection of buildings and tower block running from Rondo Dmowskiego (F-8) to ul. Świętokrzyska (F-7). Architect Zbigniew Karpiński – the guy who also designed the bunker-like US Embassy on ul. Piękna – won the competition to rebuild the area and set about remodelling the centre of Warsaw with the zealous glee of a complete nutter. Construction kicked off in 1962 and was completed seven years later, the result being four department stores, the Rotunda bank building, a blockish office building behind it, a cinema, and even a nightclub. Towering over it all were three residential blocks situated on Świętokrzyska (85 metres), Zgoda (87 metres) and Chmielna (81 metres). Originally hailed a work of genius the Eastern Wall soon became a bit of a rusty elephant, crippled and blackened with age and neglect. The collapse of communism breathed new life into the complex – Poland’s first McDonald’s was opened at the Świętokrzyska end of the complex, while the office block behind the Rotunda temporarily held the title for having the largest billboard in the world. More recently steps have been taken to polish up the area with shining glass frontages added to the department stores, and granite floored pedestrian walkways and modern tubular lighting added to the section behind the Jerozolimskie end. But snoop behind the area around the Świętokrzyska end and you’ll find a glorious blast to the past, with smashed pavements, useless bare-lit supermarkets and a couple of cafes selling ersatz coffee to hunched old men smoking cigarettes by the fistful.