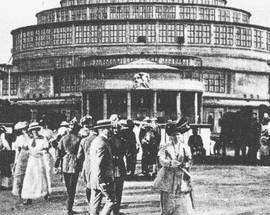 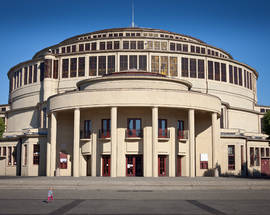 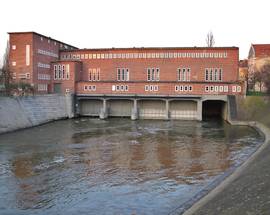 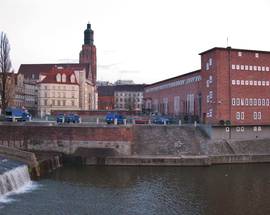 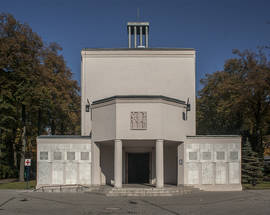 Born in the coastal town of Szczecin (then known as Stettin) in 1870, Max Berg went on to become one of the most eminent architects of his time, and nowhere will he be remembered more so than in Wrocław/Breslau. He attended the Technische Hochschule Charlottenburg in Berlin where his development as a budding architect was nurtured first by Carl Schafer, and then by Franz Adickes. On graduation he worked as a building inspector in Frankfurt am Main, and in 1907 was commissioned to sketch a blueprint for the redevelopment of Berlin. Though these plans were never realised, that did not stop his progress. In 1909 he was appointed Wrocław’s (then Breslau) chief architect and set about designing his defining work – the domed Centennial Hall. Then known as the Jahrhunderthalle, the reinforced concrete dome became the largest building of its kind when it was finally unveiled in 1913, and in 2006 was awarded the status of a UNESCO World Heritage Site. Berg was a keen proponent of the modernist style, and in particular uniform concrete structures. Living in a villa of his own design inside Park Szczytnicki (ul. Mikołaja Kopernika 19), Berg set about changing the look of Wrocław, with structures including the hydroelectric power stations on both sides of the Pomorska Bridge, the public baths at ul. Marii Skłodowskiej Curie 1 (now a Pizza Hut), and the modernist chapel and morgue facility in Osobowicki Cemetery. His vision included maniacal plans to knock down the buildings ringing the Rynek, replacing them with concrete office blocks and a 20-storey tower. His designs prompted both praise and outrage in equal measure and many projects were canned after heated debate. Disillusioned with his perceived lack of support he opted for early retirement in 1925. A keen humanitarian he refused to join the Nazis and instead dedicated the rest of his life to the study of Christian mysticism, living out the rest of his days in the spa town of Baden Baden.
Places of Interest

ul. Wystawowa 1
featured
/wroclaw/centennial-hall-discovery-centre_58001v
Closed for visitors until April 2020. With Wrocław developing rapidly in the late 19th century it was determined that the city required an exhibition hall and …
see more
Featured