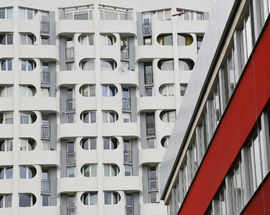 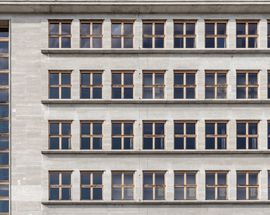 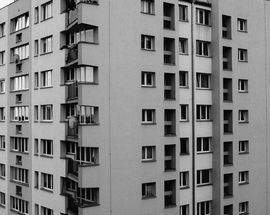 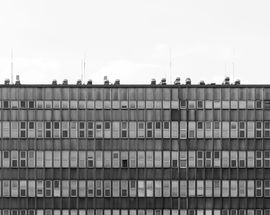 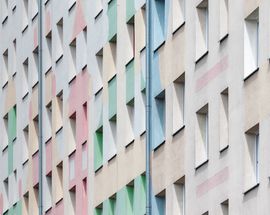 Lovers of modernist architecture will have a field day in Wrocław, a city which emerged from the turbulent 20th century with a rich patchwork of architectural patterns. What follows is a chronological rundown of the styles that shaped the city as we know it today.


As elsewhere in German-speaking Europe and beyond, modernism in architecture took off in Wrocław following WWI. The local flavours were primarily expressionism (a style related to art deco), best exemplified in the Kameleon and Renoma department stores, and Neues Bauen, also known as New Objectivity. Innovative building methods, especially the use of prefabricated elements, made construction cheap and fast, allowing authorities to combat overcrowding by efficiently constructing a series of suburban housing estates on the outskirts of Wrocław (then Breslau) - of these, the eagle-shaped Sępolno and the WuWA complex, built for a housing exhibition, are the most interesting.

The best-known example of pre-WWII modernism, however, comes from even earlier: it is unquestionably the UNESCO-listed Centennial Hall, dating back to 1908. A major tourist attraction, the concrete colossus was designed by Max Berg, an architect also responsible for Wrocław's hydroelectrical power plants situated on either side of the Pomorski Bridge. Other modernist creations in the city centre include the 1931 Städtische Sparkasse building (Rynek 9-11) and the regrettably-named Mohrenapotheke, aka Pharmacy Under the Moor (Plac Solny 2-3), now housing an office of the Gazeta Wyborcza news service.


With Breslau a major stronghold of the Third Reich during WWII, traces of the city’s Nazi past are still very much in the open - a fact that some Wroclavians, and most visitors, don’t even realise. The most dramatic of these are the above-ground air-raid shelters scattered around town, including the cylindrical Contemporary Museum and a city archive building located at the corner of ul. Grabiszyńska and ul. Stalowa. With a typical flair for neoclassicism, the Nazis also build a sprawling headquarters, which now houses the Lower Silesian Provincial Office.


In the early post-war years, there was just one state-sanctioned architectural style in communist Poland, imported from the Soviet Union: socialist realism. Monumental and strongly inspired by classicism, the style was implemented with the goal of building ‘palaces for the people’. However, since most of the rebuilding efforts in the 1940s and 1950s years focused on Warsaw (in fact, bricks collected from Wrocław ruins were shipped over to build new homes in the capital), Wrocław didn’t see much construction in this style, with one significant exception: Kościuszko Square.


The Stalinist era in Poland came to an end in 1956, three years after the Soviet dictator’s death. What followed was a political thaw that saw the very practical modernism - previously ideologically suspect, having originated in the ‘rotten West’ - promoted to the new official architectural style of the People’s Republic. The communist version of modernism was characterised by a notoriously poor quality of materials and workmanship. More flamboyant creations of the time include the Scientists' House on Plac Grunwaldzki, Dolmed, Trzonolinowiec, and Sedesowce, or the 'Toilet Seat Buildings.' The bulk of construction, however, comprised the seemingly countless housing estates - called 'blokowiska' - made up of drab blocks of flats. To see the latter doesn’t require any special directions, and in fact will be unavoidable even if you stay within the confines of the Old Town (looking at you, ul. Wita Stwosza); head out in any direction from the centre and you will find more than you could possibly care to see.

Finally, the fall of communism in 1989 unleashed a flurry of whimsical, colourful, kitschy endeavours, as Poles frantically tried to distance themselves from the greyness of communist yesteryear. The two best remnants of this frenzied era are actually both in the very centre of Wrocław: they are the Solpol department store and the Szewska Centrum office building / multilevel parking lot.

ul. Wystawowa 1
featured
/wroclaw/centennial-hall_58001v
With Wrocław developing rapidly in the late 19th century it was determined that the city required an exhibition hall and the hundred year anniversary of …
see more
Featured
Modernist Architecture

Pl. Grunwaldzki 15/21
/wroclaw/scientists-house_156092v
This, you could say, is the original: the first commie-flavour modernist high-rise built in Wrocław after WWII, before blocks of flats became commonplace. As …
see more
Places of Interest

ul. Szewska 3A
/wroclaw/szewska-centrum_156089v
Glorious. Good old times of 1990's postmodernism, when anything went, and no one as much as batted an eyelid over attaching an asymmetric, spiky, crown-shaped …
see more
Modernist Architecture

ul. Moniuszki 33
/wroclaw/igloo-house_149504v
Designed and built in the 1960s by Polish architect Wiktor Lipiński, the man responsible for the famed UFO-like observatory atop Śnieżka in the Karkonosze …
see more
Modernist Architecture

ul. Legnicka 40
/wroclaw/dolmed_156084v
Cooky and futuristic enough to be featured in the 1978 Polish-Soviet sci-fi flick Inquest of Pilot Pirx (based on Stanisław Lem’s Tales of Pilot Pirx), the …
see more
Places of Interest

pl. Powstańców Warszawy 1
/wroclaw/lower-silesian-voivodship-office_156086v
Ah, the Nazis did like their neoclassicism. With no pre-existing classicist castle to make their home, Breslau's authorities had to built their own …
see more
Modernist Architecture

ul. Tadeusza Kościuszki 72
/wroclaw/trzonolinowiec_156082v
Also known as wisielec (which can be interpreted as either 'hanging building' or 'hanging man', depending on how morbid you're feeling that day), the …
see more
Modernist Architecture

/wroclaw/sepolno_156083v
The period between WWI and WWII saw overcrowding push authorities into constructing a series of suburban housing estates on the outskirts of Wrocław. One of …
see more
Modernist Architecture

/wroclaw/kosciuszko-square_156090v
The most prominent example of socialist realist architecture in Wrocław is Kościuszko Square and its immediate surrounds, called the Kościuszko Housing …
see more