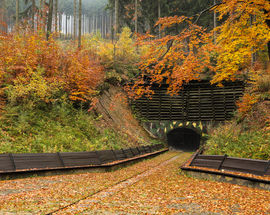 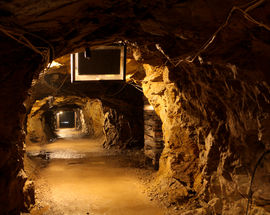 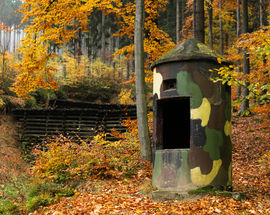 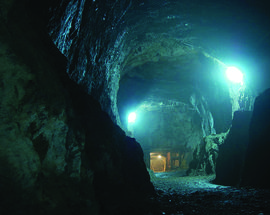 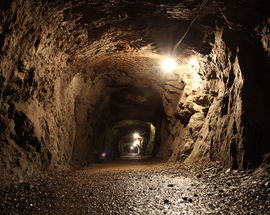 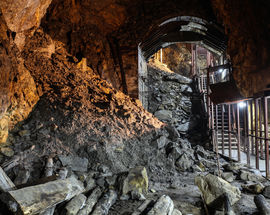 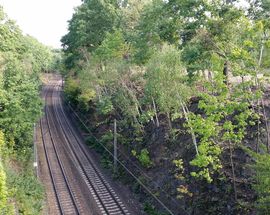 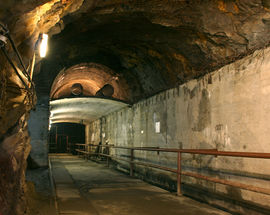 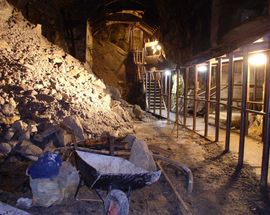 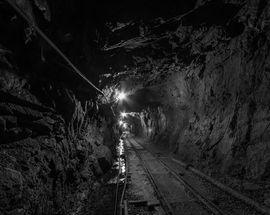 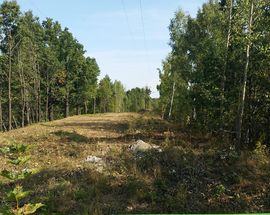 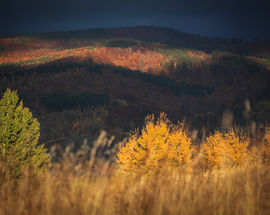 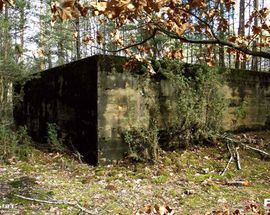 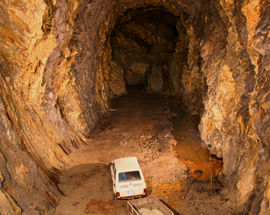 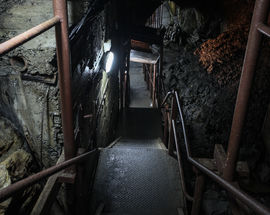 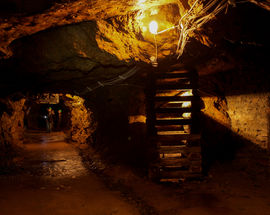 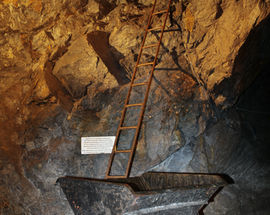 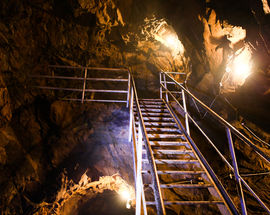 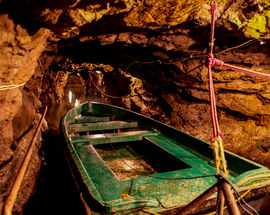 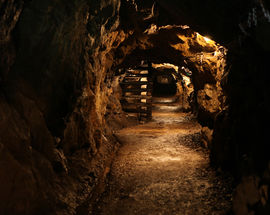 Eighty kilometres southwest of Wrocław, the 'Sowie,' or Owl Mountains are one of Poland’s oldest mountain ranges – a compact massif of steep, largely inaccessible terrain overgrown with spruce forest stretching along the Czech border. It was here in 1943, as the tide of war began to turn against the Third Reich, that Hitler ordered the undertaking of a massive, top-secret underground complex known as Project ‘Riese’ (Giant). One of the Führer’s most ambitious and maniacal schemes, the exact nature of which remains unclear, Riese remains one of World War II’s greatest mysteries, about which suspiciously little is known over seventy years since.

Underworld of the Third Reich


Unknowns temporarily aside, let’s begin with the knowns. There are 90,000 cubic metres of excavated concrete tunnels carved into the Owl Mountains, with seven major access points to separate tunnel systems found at Walim-Rzeczka, Jugowice, Włodarz, Soboń (Ramenberg), Sokolec, Osówka and Książ Castle. In addition to these main compounds, a casual walk through the mountains will reveal frequent and somewhat frightening traces of abandoned military barracks, bunkers, warehouses, building materials, excavated matter and tunnel openings, many of which are barricaded, bricked or blocked by hardened сement bags; others are filled with water and some seemingly go on forever, leading nowhere.

In 1943, as the Allies initiated air-raids against Germany, the Third Reich began the endeavour of decentralising its infrastructure and moving it to secret underground locations. As a resource rich region of hindersome mountains with an established mining tradition, Lower Silesia was an ideal choice. Based on the time works were begun, and their similarity to other armament sites, it is widely theorised that the Riese Complex was at least originally intended to house underground arms factories. Several major companies and operations were moved to Lower Silesia at this time, including the Krupp machinery factory which manufactured parts for the Me-262 jet fighter in a temporary warehouse in Głuszyca while awaiting the readiness of an underground facility in the mountains.

In the early stages of Riese, labour was done by Polish, Italian and Soviet POWs from the AL Riese labour camp – a satellite of the nearby Gross-Rosen concentration camp – from which the project took its name. Typhoid was rampant, escapes were frequent and progress was slow. In April 1944 a displeased Hitler gave the directive to transfer production on the project from the Silesian Industrial Company to the Todt Organisation (OT), headed by Albert Speer, Hitler’s chief architect and engineer. Hitler ordered that the prisoners of Gross-Rosen, primarily Polish, Hungarian and Italian Jews, be used as labourers as well. It was at this point that the direction of the project seems to have changed. OT moved their base of operations into Książ Castle where two kilometres of tunnels were hewn into the bedrock beneath the castle and a 50 metre elevator shaft was dug as part of the Riese Project. According to period documents, memoirs and witness testimonies, Książ Castle and its underground chambers were to serve as a secret headquarters for Hitler and his closest accomplices while the rest of the Riese complex was to become a hidden headquarters for the Wehrmacht. With the Nazis expelled from North Africa and the Soviet Union, and every resource needed for the success of the war, there was growing consensus among Hitler’s subordinates that the costly project was not only insane, but impossible to complete. According to his memoir, Hitler's adjutant Nicolaus von Below repeatedly tried to sway Hitler and Speer to abandon the project. Speer in his own memoirs, which shed significant though perhaps dubious light on the scope of the project, seems to acknowledge his incredulity towards the project, but was unwilling to swerve from his duties: “At a briefing on June 20, 1944, I informed the Führer that about 28,000 labourers were working at the time on expanding his headquarters. The construction of the bunkers in Kętrzyn [Hitler's famous quarters in Eastern Poland, known as 'Wolf's Lair'] cost 36 million marks, the bunkers in Pullach, which ensured Hitler's safety when he was in Munich - 13 million marks, and the Riese bunker complex near Bad Charlottenbrunn [Jedlina Zdrój today] - 150 million marks. These construction projects required 257,000 cubic metres of steel-reinforced concrete, 213,000 cubic metres of tunnels, 58 km of roads with six bridges, and 100 km of pipelines. For the Riese project alone, more concrete was used than was earmarked in 1944 for the whole population for the construction of air-raid shelters.” (Albert Speer, Inside the Third Reich, Macmillan, 1970).

In July, 1944 many of the firms working on Hitler’s unfinished Wolf’s Lair were moved to Lower Silesia to expedite the construction of Riese. However, unfavourable changes on the Eastern Front occurred much faster than anticipated for the Reich and in January 1945, the Red Army rampaged across Eastern Europe on a beeline for Berlin. Bypassing the Owl Mountains, an SS unit was able to remain in Walim-Rzeczka until May 1945, before which time they had bricked or obliterated all entrances into the underground fortress and whatever was or wasn’t stored there subsequently disappeared, as did the estimated 7,000 to 30,000 POWs who built the complex.


Of note is Speer’s calculation of 213,000 cubic metres of Riese tunnels; today less than 100,000 are known, suggesting that much of the complex may remain undiscovered. Survivor accounts, the illogical arrangement of the found tunnels and the inability to fully explore them due to their increasingly dangerous deterioration support this possibility. It is presumed that all the tunnels were to eventually have been linked, and underground narrow-gauge railways exist at some of the sites, as well as extensive plumbing that appears to lead nowhere. Due to the exodus of the German population and the military’s protracted stay in the area upon the war’s end, there is scant first-hand information on the site or its purpose. Conspiracy theories abound, and many believe the Nazis proliferated the idea that Riese was intended as a headquarters in order to hide its true intention, citing German sources as too obvious and forthcoming. Some sensationalists believe a super-weapon was in development here, while others speculate that confiscated Nazi treasure may still be buried in the Owl Mountains including missing gold and cultural treasures from Wrocław, and even the famous Amber Room which disappeared from Saint Petersburg during the war. The mass graves of the prisoners who built the complex have never been found and sadly less absurd is the grisly likelihood that they were herded inside the complex before it was detonated.


In August 2015, two men came forward claiming they had information about the location of a buried 'Nazi gold train,' obtained via a deathbed confession. The two treasure hunters entered into negotiations with the Polish government, requesting a 10% finders fee for anything discovered based on their information, which they supplemented with ground penetrating radar images that appeared to show an underground shaft with something in it. The claims sparked a worldwide media frenzy and were taken very seriously by the Polish government and military, which swept and secured the indicated area outside Wałbrzych, and conducted a non-invasive investigation of the site, ultimately concluding that no such 'gold train' existed. Undeterred, the two men behind the claims were able to secure permissions to dig at the site from Polish Railways - the owners of the land. The work began in August 2016, almost a full year after first coming forward with their claim, and was reportedly financed at a cost of 116,000 Euros by private sponsors. Work was halted after seven days when no tunnel, tracks, train or treasure were found, and the radar images thought to be the legendary train were revealed to be nothing more than natural ice formations. Nonetheless, for dozens of treasure hunters the search for the gold train continues in the mountains surrounding Wałbrzych, and the media publicity has lead to about a 45% increase in tourism in the area, leading one local tourist official to claim that, "Whether the explorers find anything or not, that gold train has already arrived."


Of the seven primary Riese sites, three are open to the public – in Walim-Rzeczka, Włodarz and Osówka. Run as tourist attractions by private companies, these sites do more to mystify than demystify the history, towards which they are at times insensitive. The Osówka complex is the largest and offers the most to tourists, while the Włodarz/Wolfsburg site features roadside tanks, a dodgy museum, and is commonly used as a paintball battleground; for a site where thousands of prisoners were worked to death or executed, to us that seems more than a little questionable. But judge for yourself.

ul. Piastów Śląskich 1, Wałbrzych
featured
/wroclaw/ksiaz-castle_76476v
Legend has it that the original castle at Książ was built at the end of the 13th century by Bolko I, Duke of Świdnica and Jawor, but it is best known as the …
see more
Featured