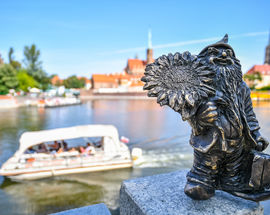 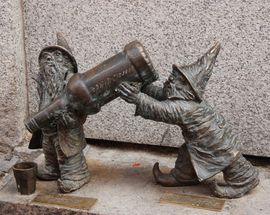 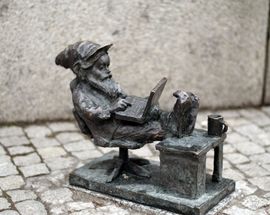 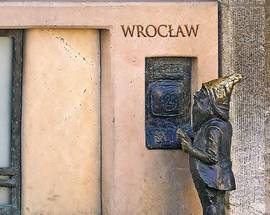 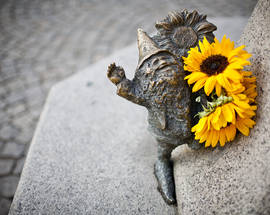 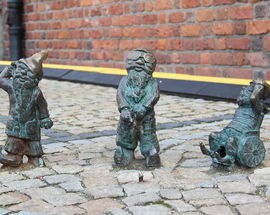 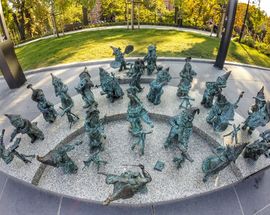 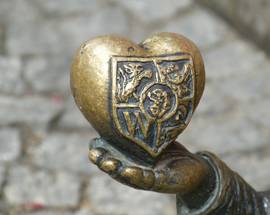 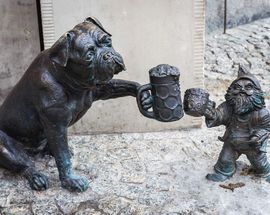 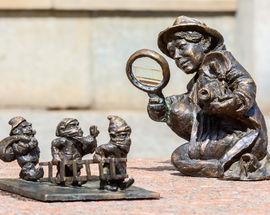 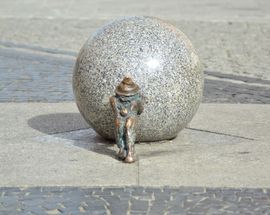 One of Wrocław’s most popular, memorable and iconic attractions is not a cathedral, not a castle or monument, but a legion of little people. Known in local parlance as 'krasnale,' some call them dwarves, we call them gnomes. Regardless of the (g)nomenclature, these merry munchkins are simply ubiquitous around Wrocław's city centre - dotting doorways, alleyways and street corners; constantly underfoot but only seen by the observant. You may well overlook the first few that cross your path, but inevitably - and often literally - you will stumble upon these popular local residents. Keep your eyes peeled and you’re bound to notice the little fellas engaged in a variety of activities about town – from guarding public spaces to passed-out drunk. Beloved by locals and tourists alike, and the object of more photos than the towering Cathedral, these prolific pranksters have become the unlikely symbol of one of PL’s most picturesque cities.

Although it sounds like little more than a twee tourist gimmick, gnomes have long held a place in Polish folklore, and their current iconic incarnation as symbols of Wrocław actually has a direct correlation to the political climate of the 1980s. Under communism gnomes became the absurdist calling card of the 'Orange Alternative' – an underground protest movement that used absurdity and nonsense to stage peaceful, yet subversive protests. Armed with paint cans and led by Waldemar ‘Major’ Fydrych, an artist and art history student at Wrocław University, the group specifically ridiculed the establishment’s attempts to censor public space. During communism, any anti-establishment graffiti or public art was quickly painted over by the militia; upon seeing fresh daubs of paint, the pranksters of the Orange Alternative quickly painted over them yet again...with gnomes. As the movement gained popularity, gnomes became inexorably linked with the Orange Alternative and Wrocław, though they soon began appearing in other major Polish cities as well.


For all the trouble it gave the authorities however, the Orange Alternative was never as interested in political ideology as buffoonery. Detained in a Łódź police station for graffiti, Major Fydrych was happy to explain the gnomes to state authorities in academic terms: “The thesis is the anti-regime slogan. The anti-thesis is the spot and the synthesis is the gnome.” Spoken like a true art history student. As the Orange Alternative graduated to bigger happenings, gnomes began to appear in demonstrations as well. International Children’s Day on June 1, 1988, was celebrated in Wrocław by dozens of locals dressed as gnomes and smurfs, complete with orange hats and handkerchiefs, while an anti-Chernobyl protest saw Major Fydrych handing out iconic peaked orange gnome hats to passing pedestrians. After the fall of communism in Poland, the gnomes remained a symbol of Wrocław, repurposed by the new regime to be a tribute to the Orange Movement and playful city ambassadors.

The first gnome in its modern statuette form was Papa Krasnal who was placed in 2001 on the corner of ul. Świdnicka and ul. Kazimierza Wielkiego, near the subway where Orange Alternative demonstrations often took place. Commissioned by Agora (the publisher of newspaper Gazeta Wyborcza) to celebrate the history of the Orange Alternative, Papa Krasnal remains the largest of his progeny.

Things really took off in 2005, however, when local artist Tomasz Moczek - a graduate of the Wrocław Academy of Fine Arts - was commissioned by Wrocław City Council to create five more gnomes. The little devils proved so popular that envious local businesses quickly got in on the game by contracting other local artists to produce more, and in the span of only a few years, gnomes had proliferated around Wrocław to the point that they now constitute a veritable ‘sub-population’ of the city. The little buggers are currently rumoured to be running rampant to the score of over 800(!!!), making it literally impossible for visitors to find all of them in one visit, or even for the city to keep track of them all at this point.

Arguably too much of a good thing, indeed what was a fun tourist activity at its start has been slightly soured by the economics of its success. As every local business decided they needed their own gnome, some of Wrocław's vertically challenged citizens began to look at bit too sponsored, some fell victim to vandals, while others were lost track of as businesses moved or closed down. The city's own website - where you can find gnome photos, descriptions, history and more information - currently lists the locations of 472 gnomes, while the popular Wrocław Gnomes city game app keeps a more updated tally that currently reaches over 800, some of which have wandered as far afield as Germany and the Netherlands!

Nevertheless, there's no doubt that these dwarves are a delight, and gnome hunting is one of the most popular activities for visitors to Wrocław. It's an incredibly fun alternative to traditional sightseeing, and a great way to keep the kids involved while tramping around town. To the latter point, in most tourist info points you can pick up a special map for kids that includes stickers and shows where 30 of the most centrally located gnomes are to be found; just be prepared to have it then dominate your time until you've found them all (we speak from experience). Alternatively, download the 'Wrocław Dwarfs / Wrocławskie Krasnale' city game app, which includes the locations of over 800 gnomes, to collect achievements and compete against other gnome hunters. For our part, at the bottom of this article we've GPSed 25 of our favourite gnomes, so you can use your smartphone to find them while you're out and about if you're desperate.

In all honestly, however, you don't need any of that to find dozens of gnomes on your own. With these little people positioned literally every 200 metres or less, all you really need are a keen pair of eyes and a predisposition towards dwarves (or not, they'll find YOU). See how many of these mischievous miscreants you can spot as you stroll around town and let us know in the comments. Happy hunting! 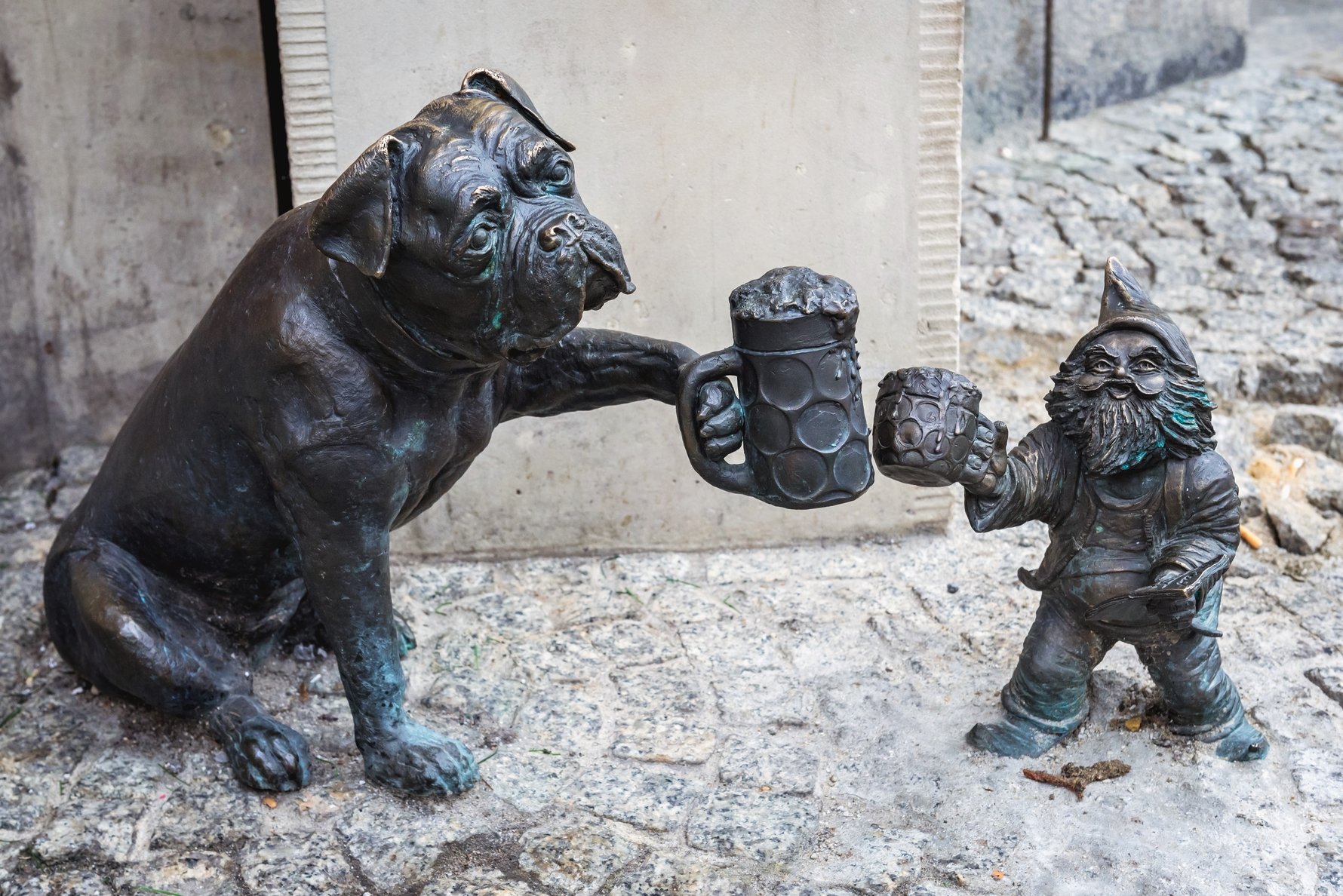 Some Gnotable Gnomes Around Wrocław

Zaułek Ossolińskich (from ul. Grodzka)
/wroclaw/ossolinek_119793v
Pouring over books from Wrocław's adopted library, this little guy is hidden inside the alley of the Ossolineum.
see more
Wrocław's Gnomes

ul. Borowska 138
/wroclaw/gasiorek_119796v
This little fella is a firefighter, putting out flames in the secret corridors, unseen or underground places of the city before they become big problems for …
see more
Wrocław's Gnomes

ul. Świdnicka (next to the Post Office)
/wroclaw/syzyfki_94362v
This beloved and much photographed pair were among the first gnomes to appear on the streets of Wrocław.
see more
Wrocław's Gnomes

Corner of ul. Św. Mikołaja and ul. Odrzańska
/wroclaw/spioch_119792v
See if you can find this drowsy fellow outside his abode just behind the 'Jaś' tenement on ul. Św. Mikołaja.
see more
Wrocław's Gnomes

ul. Świdnicka 18/20
/wroclaw/florianek_123998v
Grab a button on your clothing when you see this chimneysweep dwarf, and you'll have good luck!
see more
Wrocław's Gnomes

Rynek (near the entrance to the Town Hall)
/wroclaw/gluchak_94366v
Speak as loud as you want, this one's a bit hard of hearing. Part of the city's triumvirate of disabled gnomes outside the Ratusz (includi
see more
Wrocław's Gnomes

Bulwar Włostowica
/wroclaw/pracz-odrzanski_94363v
This little guy can be seen doing his laundry on the banks of the Odra between Most Piaskowy and Most Tumski.
see more
Wrocław's Gnomes

ul. Jatki
/wroclaw/rzeznik_94361v
Named 'Butcher,' this hatchet-wielding fiend refers to the history of ul. Jatki - which was once a row of butchery stalls - and hovers dangerous
see more
Wrocław's Gnomes

Corner of ul. Świdnicka and ul. Kazimierza Wielkiego
/wroclaw/papa-krasnal_93618v
Bigger than his brethren, Papa Gnome has the distinction of being the progenitor of the entire Wrocław gnome phenomenon. He was first, and he's still the …
see more
Wrocław's Gnomes