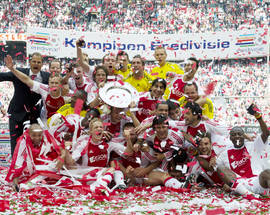 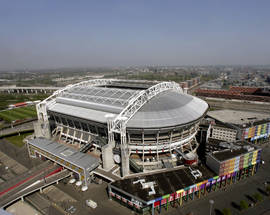 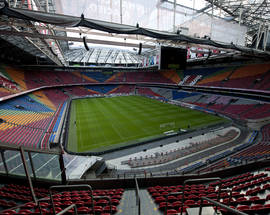 If you mention the name Ajax anywhere in the world, everyone will know what you're talking about. Amsterdam's legendary football club has become a household name in large part due to its concept of total football.

Yet despite, or perhaps, owing to its success the Dutch either love or hate Ajax and there's no middle ground. According to an annual study by Football International (Holland's biggest football magazine), Ajax boasts the most supporters of any club in the country, which is estimated to be around 3.7 million. Ajax also has the biggest stadium in the Netherlands with a capacity of 52,960 seats and its supporters' club is the largest by far at about 85,000 members. Ajax easily surpasses all other teams with these impressive statistics, but as we mentioned there are another 13 million people around the country who would rather gouge their own eyes out then watch the club win another cup.

History
This aversion could very well be the result of the perceived arrogance that surrounds Ajax. As a rule a capital's club is less popular in the rest of the country in general and when no prizes are won by other teams cockiness can breed resentment.

In the 1970s Ajax wrote a new chapter in the history of the club building on a successful period that began in the 1930s under the English trainer Jack Reynolds. After arch rival Feyenoord set an example by seizing the first ever Dutch European Cup for League Champions, Ajax improved on this achievement in the next three years.

In 1972 the 'world cup for teams' was added to the side's already full cabinet of trophies. In these days Ajax was synonymous with a new concept known as total football. According to this system the ball is passed around very quickly and not only the attackers can score. The system was propped up by Ajax's number one icon: Johan Cruijff. He was named best European footballer in 1971, 1973 and 1974. However, such is the fate of Dutch football clubs and Ajax soon lost its best players. Johan Cruijff left for Barcelona, a team close to Ajax’s heart.

At the end of the 1980s Ajax had a revival when that other legendary club hero – Marco van Basten – helped the team win the European Cup Winner’s Cup. After that it took until the mid-1990s for Ajax to blossom again. Under the management of top coach Louis van Gaal the concept of total football was revived yet again. This time the main players were the Finnish footballer Jari Litmanen and the De Boer brothers, Frank and Ronald. Ajax played its best match on 22 November 1995 against Madrid on the Spanish side's home pitch. The Dutch boys from Amsterdam ran circles around the Iberian players.

Although the final score was a modest 0-2, Ajax’s performance at Bernabéu was an impressive show and the Madrid supporters honoured the Amsterdam side with a standing ovation. Even the team's supporters were complimented with an honour guard on their way home. The golden years of the 1990s were reinforced by winning the Champions League and the world cup for teams, again in 1995.

Rivalry
Trainer Louis van Gaal’s cocky comments didn't lessen Ajax’s reputation for arrogance. When Ajax won the Dutch championship yet again, he announced that Ajax was not only the best team in Amsterdam, but also in the whole of Holland including big football towns such as Rotterdam and Eindhoven. The existing rivalry between these cities grew exponentially.

Ajax next built the Amsterdam Arena on the edge of town replacing the small but very central De Meer stadium, but the club became a victim of its own success. The result was something of an exodus from which Ajax has only recently recovered. The millions of euros acquired by floating the club on the stock market were invested in the wrong players and an exorbitantly expensive organisation. Basically the Amsterdam club had to start from scratch. But to its credit, its famous youth academy kept producing some excellent players, the most recent successes being Wesley Sneijder and Rafael van der Vaart. But after competing for seven years without achieving the top spot, Ajax finally soared to its old heights in 2011 by winning the Dutch title.

Visit Ajax or the stadium
Whether due to the magic of its illustrious past, the excitement of the famous arena or just as part of a football pilgrimage, Ajax still draws tens of thousands of tourists every year. There are a high number of season ticket holders, so only a few thousand seats are for sale for each game, which can be bought via the official Ajax site (www.ajax.nl). Unfortunately, even when a game has officially sold out, you'll often find lots of empty seats in the stadium as not all season ticket holders are completely loyal to their team. The matches, however, are seldom boring in large part due to Section 410. This part of the stadium is populated by mostly young fans that are the team's most die-hard supporters. This is in stark contrast to the official so-called core support of the F-side, which you can find behind the goal. They've recently been overshadowed by the young supporters of 410.

Amsterdam ArenA
Anyone who’d like to visit the stadium itself can take part in the World of Ajax walk-in tour. It brings you to the edge of the pitch, you can have a look from the main stand and enter the press room. During a one-hour tour the guide will tell you all about the stadium and the club. Prices: adults €12,
children €10. Departures from main entrance E on the west side of the stadium. After the tour you can visit the official fan shop for all of the Ajax merchandise you can possibly want. Opening hours and tour departure times are subject to change during and around event days so check www.amsterdamarena.nl before you go.

ArenA Boulevard 1
/Amsterdam/World-of-Ajax-Tours_96465v
If you're like many of Amsterdam's visitors, a ticket to an Ajax match would be at the top of your wish list of things to do in the Dutch capital. …
see more
Sports & Outdoors

Overtoom 2-8
/Amsterdam/Perry-Sport-and-Outdoor_96461v
This sporting goods store has all of the usual including footwear, skis, winter jackets and other active outdoor gear as well as Ajax fan souvenirs.
see more