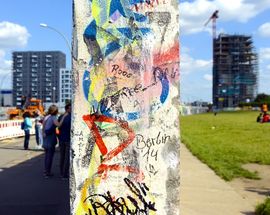 As we continue to hurtle through the 21st century, few cities feel as international, as universal as Berlin. This is a city that opens its arms to anyone and everyone, where cultures collide in conversation and cuisine. The German capital, more so than anywhere, exemplifies the curiosity of modern times, where meeting different people from all over the world is the norm, but for 10,316 days, the opposite was true.

That was for how long the Berlin Wall stood. For 28 years, a concrete barrier ran through the heart of the city, the most tangible example of a Cold War that pitted ideology against ideology and split Europe in two. What went up in relative secrecy on August 13, 1961, came down in emotional scenes on November 9, 1989. The Berlin Wall split families, friends, neighbours and colleagues. 45,000 concrete blocks stood between East and West by the time it came down, along with 259 dog runs and more than 300 watchtowers. What started as a hurried attempt to plug the East German brain drain eventually became one of the great tumours on the planet, an intricately designed piece of architectural horror that existed to make people’s lives worse.

It couldn’t last forever, although the people of Berlin could be forgiven for feeling like it would. Escape attempts were frequent, with more than 5,000 known cases of people trying to flee, largely from East to West. The total number that died trying to cross the wall isn’t known, with estimates ranging from 80 to 240. The first death came just nine days after the wall went up, while the last happened just a few months before it came down. The Wall changed everything for everyone. The 30 year anniversary of its removal is an anniversary well worth celebrating.

And boy is the city going to celebrate! Over seven days at the beginning of November (November 4 — 10, to be exact), more than 100 events will take place at the seven key locations of the Peaceful Revolution. The formation of the first East German opposition will be told at Gethsemane Church, while Alexanderplatz and Brandenburg Gate will reprise their statuses as hosts of the largest protest demonstrations and the wild celebrations of the opening of the wall respectively. The party then moves on to Kurfürstendamm (where the first reunions took place), the Stasi HQ in Lichtenberg (the end of the GDR in all but name) and Schlossplatz (to celebrate the first freely elected parliament in GDR history). The party will come to an end at that most fitting of locations, the East Side Gallery.

The entire city will go Wall anniversary crazy, with plenty of events taking place outside of the official celebrations. The Stasi Museum will host a very special exhibition looking at those individuals who bravely changed the face of history, while the Deutsches Historisches Museum tackles German history — that most daunting of subjects — in typically stylish and sensitive fashion. There are plenty of things going on, but these two demand special attention.

Many hoped and believed that the tearing down of the Berlin Wall was the first step towards a new Europe, one that embraced its different cultures and would come closer together. The populism and nationalism of recent times jeopardise this once more, so this anniversary could not be more pertinent. 30,000 messages of love, peace, acceptance and harmony will float into the air above Brandenburg Gate at the end of the celebrations, as Berlin and Europe look to what could be a beautiful future. 30 years already? Wow, how time flies…
Museums

Ruschestraße 103, Haus 1, Lichtenberg
/berlin/Stasi-Museum_23743v
East Germany's State Security Service or Stasi was responsible for intelligence gathering both at home and abroad. It spied on its own citizens, sometimes …
see more
Landmarks

/berlin/East-Side-Gallery_98273v
At 1,3 km, this free open-air 'gallery' is the longest remaining original stretch of Wall in Berlin. The 'East Side' started out as a favourite haunt of …
see more
Landmarks

EDITOR'S PICK
/berlin/potsdamer-platz_23258v
Once a busy intersection at the modern heart of a thriving metropolis, Potsdamer Platz was heavily damaged in the war, and suffered again when most remaining …
see more
Editor's pick
Landmarks

Friedrichstraße, Mitte
/berlin/Checkpoint-Charlie_98272v
For most visitors to Berlin, Checkpoint Charlie is a 'must see', though the reality is usually not what most tourists had been expecting. This free open-air …
see more
Museums

Erna-Berger-Straße 5, Mitte
/berlin/Berlin-Wall-Watchtower_122237v
Between 1966 and 1972, over 200 round watchtowers type BT 6 were built along the Berlin Wall to replace older wooden towers. The very last remaining …
see more
Museums

Karl-Liebknecht-Straße 1, Mitte
/berlin/ddr-museum_25782v
Rather than concentrating on the Wall, state terror and other dark aspects of the East German regime, this popular museum presents a glimpse of daily life …
see more