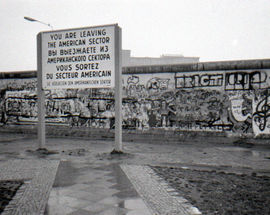 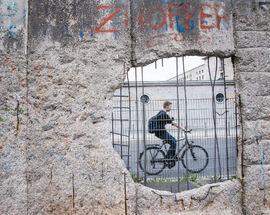 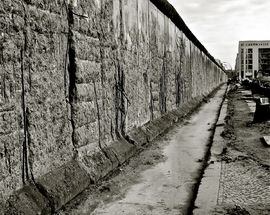 Two East Berliners remember how they experienced the opening of the Berlin Wall in 1989.

“When I really felt free for the first time in my life? I can tell you very precisely: on November 9, 1989, when I was 22 years old. That night, from ten o'clock in the evening until six o'clock the next morning, I had to stock shelves in the supermarket where I worked. Around half past eleven the western radio station suddenly announced that the Wall was open. We briefly interrupted our work and discussed our options. Did we want to stop working and go to see exactly what had happened, or did we want to finish our shift? We chose the latter. Well, we Germans have a greatsense of duty. If the pensioners want their bread, milk and newspaper at eight o'clock, they will get them, Wall or no Wall.

Friday morning at six o'clock sharp I was finally outside. I hopped on the first tram that passed by. Inside it was dead quiet, quieter than I had ever experienced. Almost everyone held a newspaper and pretended to read it. That was nonsense, but nobody wanted to stand out, as this tram went straight to Bornholmer Straße where the border crossing was. When we stopped there a little later, we looked at each other carefully. There was no police, there was no Stasi: we were not checked. People threw away their newspapers and slowly started smiling and laughing. Suddenly everyone got up and the tram was empty.

Outside there were hundreds of empty cars with the doors open and the keys still inside. Everyone walked towards the Bösebrücke bridge which had separated West and East until then. On the bridge I met an old classmate: Hey Mike, hey Stefan! The Wall is open! The Wall is open! Mike already had a bottle of prosecco from the West and I remember that we toasted and danced briefly. After that I crossed the bridge. Several buses were parked there, so I just got on one. We didn't have to pay and I sat down at the front. When the bus was full, the driver closed the door and picked up his microphone. He warmly welcomed us to the West and concluded with the words: 'Welcome to freedom'. I'll never forget that moment, I cried. All the fear, all the worries: it all fell away from me. The chains that had held me for so long had just exploded.”

“October 7, 1989. That was the first time in my life I was really scared. Adult fear. It was the anniversary of theOctober Revolution in the USSR and GDR. Correspondingly, it was a big national holiday in the East. This was celebrated with processions and speeches, only this time a few of us celebrated differently: with banners saying things like “No violence” as a precaution, or demanding changing the conditions of our beautiful country. For the first 250 metres in the demonstration all was well, then suddenly our small group was separated from the others and 20 of us were pushed to the fence. Offering any kind of resistance was extremely painful. We were separated and loaded into waiting trucks which drove us to the police station. There, humourless policemen with sub-machine guns made us sit down. We were forbidden to speak and were taken away one by one for interrogation. We were asked many questions that could not be answered and our possessions were thoroughly searched. They probably hoped to find some flyers that would have incited us to this action. Then shooed us back into the trucks, we were now barred in the back with two armed policemen, driving out of the city, into the dark countryside. My only thought was that they would take us to a remote place and shoot us, but then we arrived in a town. To
this day I don’t know which. In a large room we were made to sit on chairs that were two meters apart and facing the wall. The individual interrogations started anew. Questions. Questions. Questions. Who? Why? How? They wanted to find out whether the demonstration had been planned. Sometime in the morning it was all over. They loaded us back into the trucks and dropped us off at home, one by one. That was it.

The next demonstrations on Berlin’s Alexanderplatz were the largest in the history of the GDR, and I took part again. Hundreds of thousands came together, and there was an incredible amount of confidence in the air. Adults became happy children, hands and lips trembled, and our fear for speaking out was simply gone. My cousin in the National People’s Army at the time later told me that they had been ordered to go into position around Berlin and were just waiting for the order to attack. This day could easily have ended like the GDR’s bloodily defeated uprising of 17 June 1953, or that on Beijing’s Square of Heavenly Peace. Fourteen army divisions had surrounded Berlin, being told that a breakthrough from West to East across the Wall was planned for November 4. The GDR’s leader Egon Krenz had ordered the whole thing, but others refused to play along, so the troops stayed put. Gorbachev’s words “He who comes too late will be punished by life” were understood well by some. Nowadays, when I hear the word ‘Wende’, or peaceful revolution, it all comes back to me. As if all this had been so easy. We narrowly escaped a catastrophe back then.”