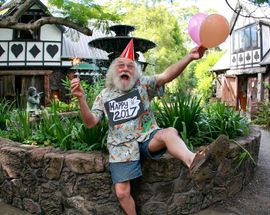 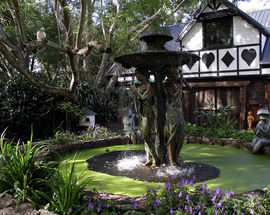 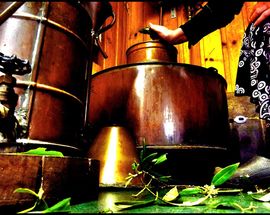 In a town full of characters (and we mean that in a sincerely affectionate way), one name and white bearded face stands out from the rest: Michael Ward of the Mount Tamborine Distillery. Mike is a local legend who has appeared in countless media outlets, including a popular British travel program that is still responsible for bringing regular visitors more than half a decade on. It's not difficult to see why, as his stories could likely fill a number of weighty tomes, and if we told you how old he is you wouldn't believe us, as he looks at least three decades younger and has the energy of an unruly teenager, with eyes so full of life and excitement that chatting with him makes you feel a bit tipsy before even taking your first drink in this wonderfully bizarre little corner of the mountain.

Given all of this, visitors are usually surprised to hear that Mike is just the pretty face of the operation, as his lovely and all too humble wife Alla is the real master distiller behind the curtain – she's the one responsible for crafting all of the award-winning schnapps, liqueur, brandy, gin, vodka and eau de vie produced here. And win awards they have! With some 320 international accolades and counting, the distillery is officially the most awarded in Australia, and surely one of the most awarded of its size in the entire world. No visit to Tamborine Mountain is complete without a stop at the distillery (even if you're not a drinker), and while it looks like the kind of place that could only be found by foolishly following some breadcrumbs through the forest or chasing a white rabbit down a rabbit hole, it's actually surprisingly easy to find just a couple streets east of the town centre.