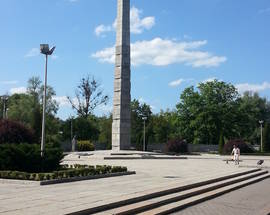 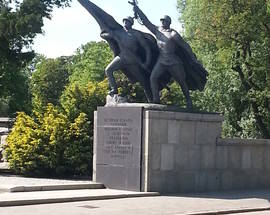 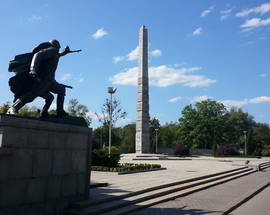 On the 6th April 1945, the 11th Guards Army and other Soviet troops who had been laying siege to Königsberg for several months launched their final bloody offensive to take the city. In the 4 days of brutal street warfare which ensued, loss of life on both sides was colossal and the 1200 Guardsmen monument, without doubt the city's most impressive in terms of scale, was erected just 5 months later in commemoration of the ultimate patriotic sacrifice made by Soviet soldiers both in this action and throughout the war.

Planned and collaborated on by veterans of the assault, with architects J. and F. Melchakov Narushyan and a group of Lithuanian sculptors brought in to realise their ideas, the monument is situated on the site of a mass grave and incorporates three main components: a central obelisk with eternal flame in front, a memorial wall with epitaphs and reliefs curving round behind, and 2 sculptural groups featuring troops storming forward (one at either end of the wall). Epic simply does not describe the overall combined impression.
Show on map