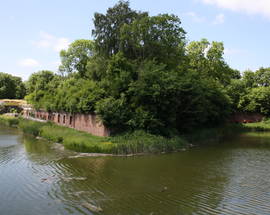 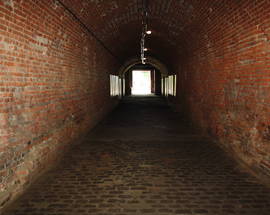 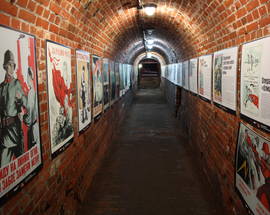 Fort 5 is the most visitor friendly of all the forts, although displays are frustratingly only in Russian. What you’ll find is an underground network of tunnels and surviving rooms whose damage (and the reason for it) demonstrates how incredibly well built the construction must have been to survive as much as it did.

Getting there
You will find the fort located on the city’s north-west boundary on the main road to the airport and Zelenogradsk. The turning towards the fort is not difficult to find if you keep as eye out for the tall statue marking the city boundary.

To get there, take trolleybus no. 1 from the city centre, bus 36 or a taxi.

The fort
The fort was one of a network of 12 built between 1872 and 1890 paid for with French reparations after Germany’s victory in the Franco-German war of 1871 and built in part by captured French troops.

The construction took the shape of an elongated hexagon covering an area of 215 metres by 105 metres and was originally constructed from brick. The complex occupied an island surrounded by a moat 20-25 metres wide and 3-5 metres deep. In 1894 it was named in honour of Friedrich Wilhelm III, King in Prussia from 1797 to 1840. Despite the huge investment, by the beginning of the 20th century advances in artillery had made the fortress somewhat obsolete and even though it was supposed to be a secret military installation, it was often used for firework displays and celebrations.

In the early part of the 20th century attempts were made to re-fortify the network of forts and the ceilings of Fort 5 were replaced by reinforced concrete. With World War II approaching Königsberg, the fortress was strengthened again and converted into a might pillbox with 8 heavy guns, 25 mortars and over 50 machine gun posts. The garrison who manned the fort numbered approximately 300 men and the fort was now equipped with barracks, kitchens, food and ammunition stores and hospital.

What turned out to be the Red Army’s final assault on Königsberg began for Fort 5 on April 2, 1945 when a battery of 280mm guns began shelling the fort. Then on April 6, 1945, Fort 5 found itself directly in front of the main attack axis of the Soviet 43rd Army as the ground assault began. By the end of the first day the fort found itself completely surrounded though it continued to offer fierce resistance and withstood the assault longer than any other fort in the Outer Ring.

The fort found itself facing attacks from all sides and on the night of the 7th/8th of April parts of the fortress wall were breached. The 280mm gun was brought back into the battle at the rear and managed to split, though not destroy the concrete. But this was enough for Infantry from the 126th and 235th Rifle divisions of the 43rd Army to storm the fort and the garrison surrendered on the morning of April 8. Fifteen Red Army soldiers were awarded the Gold Star Medal of the Hero of the Soviet Union for their part in the storming of Fort No. 5. Their names can be seen on a memorial standing near the entrance.

A special commission later examined the remains of the fort and discovered that despite being hit 73 times by the 280mm guns, the fortress walls ad only been breached twice and that in spots which had suffered multiple hits.

Following the war, Soviet engineers used the remains of the fort to destroy discovered ammunition and its current state is a result of these explosions rather than the battle in April 1945.

The fort was originally opened as a museum in 1979 although in 2010 it became part of the Kaliningrad Regional History and Art museum and a new exhibition was opened. Visitors are now able to wander around both under and over ground to explore the various rooms, tunnels and casements. The fort contains a series of small permanent exhibitions which look interesting enough if only there were some English translations. The four are ‘Monuments of fortification architecture’; ‘The Assault of Königsberg’; ‘The Germans against Hitler’ and ‘East Prussia. Spring 1945.

Outside of the fort you’ll find a collections of weaponry from the time of the battle and a memorial to those Red Army troops who gave their lives in the taking of the fort.

If you are not able to visit in person you can take a virtual tour of the complex by visiting the site www.fort5.westrussia.org.