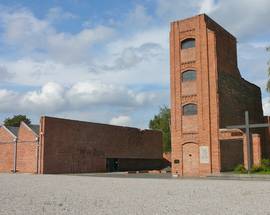 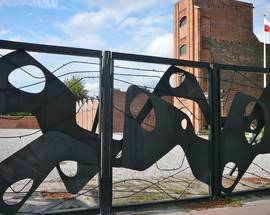 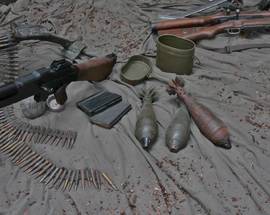 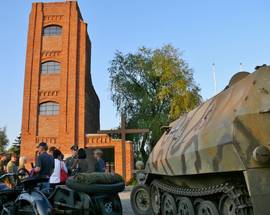 While the Nazis made a grim name for themselves in what are now well-known killing fields around Poland – Auschwitz, Dachau and even Łódź’s own Litzmannstadt Ghetto comes to mind – the atrocities at Radogoszcz prison were similar in their unflinching brutality despite its relatively unknown status outside of Łódź. What remains today of Radogoszcz, which was created by the Nazis to house Poles who were deemed “dangerous,” is a stark insight into the evil mechanics of the Third Reich. As if to bring the horror into even sharper focus is Radogoszcz’s location, smack in the centre of residential Łódź, and a visit to this often forgotten camp proves extremely sobering.

The buildings of Radogoszcz prison were originally constructed in the 1930s at the behest of the industrialist Samuel Abbe. At the outbreak of WWII the factory complex was requisitioned by the Polish Army before passing into the hands of the German invaders. For the first month it functioned as a Wehrmacht barracks before being turned into a transit camp for Polish prisoners deemed a threat to Nazi ideology. As time marched on the camp grew to operate as a prison and labour camp, processing an estimated 40,000 inmates – a quarter of which are thought to have been killed. From the outset conditions were harsh; Radogoszcz was a factory first and foremost, and this was reflected in the facilities. Beds, kitchens and bathrooms took months to be added, and while it’s hard to put an exact figure on the number who perished here disease, mistreatment and executions were common. However the grimmest chapter of Radogoszcz’s history was to come on the night of January 18, 1945. With the Red Army approaching and liberation just hours away, Nazi wardens embarked on the summary execution of all prisoners. The inmates rose in spontaneous rebellion, forcing the guards to flee the premises but not before locking the prisoners into the factory and setting fire to the grounds – an estimated 1,500 people were incinerated, with only thirty surviving to see peace.

‘Hundreds of human bodies were scattered around. Faces of victims were distorted by terrible pain and frozen in a shriek of terror; and no-one who saw their eyes would ever be able to forget that hell on earth.' - Arkadiusz Sitek
​

The hasty Nazi retreat left Radogoszcz Prison a smouldering shell, but its importance as a site of struggle and martyrdom was not lost on the locals. Work began immediately to conserve the prison as a memorial for all who suffered within and an exhibition was opened on the third anniversary of Łódź’s liberation, while in 1961 a thirty metre spire was unveiled on the site of the former camp. The courtyard, slightly smaller than the original, is now home to numerous artsy memorials. A number of plaques commemorate those who died within and those Łódź citizens deported to Mauthausen and Dachau. Along the exterior wall on ul. Zgierska is a mass grave of 37 unidentified victims.

The exhibition hall lies just beyond the hollow shell of the factory, and inside the displays are accompanied by English text. The prescribed tour takes visitors through a chronological history of wartime Poland beginning with the 1939 invasion and the subsequent battle for Łódź. Posters calling men to arms, gas masks and grenades sit behind glass cases, paying tribute to those who gallantly resisted the Nazi war machine. Innocuous items like beer bottles, cigarette boxes and tea cups sit alongside more sinister displays like Germanized street signs, execution lists and photos of Łódź decked out with fluttering swastikas. It looks chilling enough, but it’s not half as thought-provoking as what lies in store. Beyond the initial displays are the mug shots of dozens of children sent away to be ‘Germanized’ in the camp on ul. Sporna 73. Next up is a section devoted to the Jewish Ghetto, with items of note including ghetto currency and the mandatory yellow stars. Further on there’s also a display of letters from concentration camp prisoners, striped uniforms and even a bar of soap allegedly made from human fat. Your tour concludes with a couple of rooms dedicated to Radogoszcz itself. Standing centre stage are copies of a flogging block and a prisoner’s bunk, while clinging to the walls are the photos of inmates as well as images of cheery looking guards. None of this prepares you for the final room, however. It’s here that the events of January 18th, 1945 are remembered. The photographs of charred, burned bodies leave nothing to the imagination, while making the display all the more poignant are a collection of singed family photographs recovered from the dead. There are two permanent exhibitions - "Łódź and its Surroundings During the Second World War and Occupation 1939-1945" and "Radogoszcz 1939 - 1945".

Located just northwest of the city centre, getting to Radogoszcz is a cinch. Taxis charge around 20-30zł from the centre. To return back to town you’ll usually find a couple of cabs lurking around the gates of the nearby cemetery. For public transit try the trams number 4, 11, 16 and 46 which run up ul. Zgierska and stop directly outside the prison. The 11 and 16 trams run past Manufaktura and parallel to Piotrkowska on the trip back.
Museums

ul. Zgierska 147
/lodz/radogoszcz-prison-museum_55112v
The hasty Nazi retreat left Radogoszcz Prison a smouldering shell, but its importance as a site of struggle and martyrdom was not lost on the locals. Work …
see more