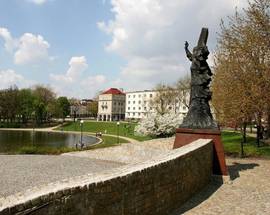 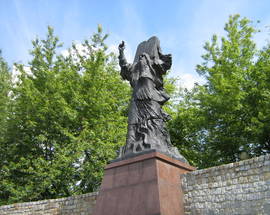 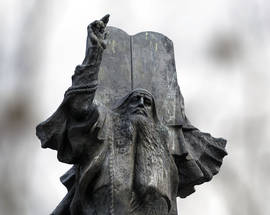 The Decalogue Monument is appropriately placed in Staromiejski Park at the point where two former synagogues were located: Łódź's original 'Old Synagogue' and later the Alte Szil Synagogue. Unveiled in 1995, the monument shows Moses holding the tablet of the Ten Commandments and was designed by Kazimierz Gustaw Zemła.

Built in 1809, the Old Synagogue was the first wooden synagogue in Łódź, but by 1854 services were ceased due to fears that the building would collapse. By 1871 the new concrete synagogue Alte Szil was built on the same ground and was considered one of the greatest synagogues in all of Poland. It was rebuilt in 1893 and sported various styles such as Byzantine, Moorish Revival and Romanesque Revival. Sadly, but hardly surprising, the Nazis robbed and burned Alte Szil in November 1939, with nothing remaining.