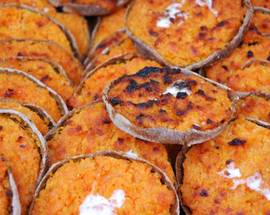 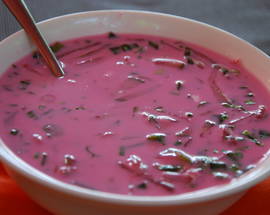 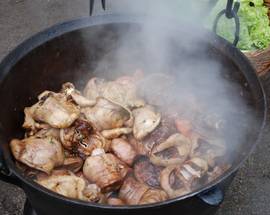 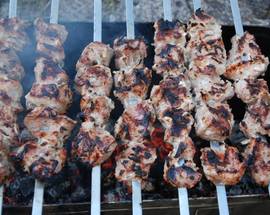 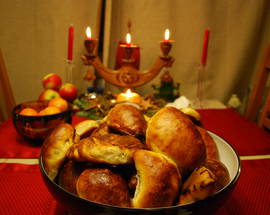 If you’re looking for something light and healthy to eat, then you’ve come to the wrong place.

In truth, Riga’s dining scene offers plenty of options for people who prefer to avoid fatty foods and even several vegetarian and even vegan restaurants, but if like most visitors you’d like to chow down on some local cuisine then pop your heart medication, pull out your pocket defibrillator and get ready to get greasy.

Where to begin? That’s easy. A Latvian meal is seldom complete without pork. Even if you order a dish without the national meat, there’s a good chance that the chef has snuck it into your food somehow, usually by cooking other food, including vegetables, in bacon fat. Karbonāde ar kaulu (grilled pork chops), karbonāde (pork schnitzel) and cūkas stilbs (pork knuckle) are all favourites, but for more exotic pig dishes keep an eye out for cūkas ausis (pig’s ears), grūdenis (pig’s head stew) and cūkas kājas (pig’s feet).

Kartupeļi (potatoes) are served with nearly all Latvian food and they’re usually either boiled, fried, boiled and then fried or mashed.
Sometimes, traditional restaurants will also offer griķi (boiled buckwheat) instead of potatoes. If in doubt, stick with the potatoes.

Kāposti (cabbage) also plays a major role in most Latvian meals. Sometimes it’s served cold as a salad or hot as a side dish like skābie kāposti (sauerkraut). We, however, prefer šķovētie or štovētie kāposti, which is like sauerkraut but sweeter and darker in colour as it's stewed longer with sugar.

Pelēkie zirņi (grey peas) is another side dish worth trying. Big, grey round peas are boiled and then fried with bacon and usually served with kefīrs (kefir) or skābais krējums (sour cream).

All kinds of pickled items are also on offer at most Latvian establishments including beets, mushrooms and, of course, cucumbers. If you see the word marinēts on a menu it means that something has been marinated in vinegar.

Latvians refer to all salads as salāti including the classic local staple rosols, which is a combination of pickled vegetables, potatoes and meat held together with loads of majonēze (mayonnaise), sinepes (mustard) and mārrutki (horseradish). Other salads are drenched in sour cream.
Soups are usually hearty like frikadeļu zupa (meatball soup), zirņu zupa (pea soup) and the Russian favourite soļanka (tangy tomato soup with potatoes, sausage, kidney and pickles).

Although Latvians love ice cream, cake and chocolate, traditional desserts include maizes zupa (rye bread pudding) and ķīselis (starchy fruit pudding served with milk). Bakeries are also full of sweet and savoury pastries called pīrāgi with any number of fillings from bacon and onions to mushrooms and even cherries.

Finally, a sklandrausis is a delicious sweet pie consisting of mashed carrots and potatoes baked in a rye flour crust. Although traditionally from the western province of Kurzeme, this tasty treat is now baked throughout Latvia. In 2013, the sklandrausis became the first Latvian food to be listed in the EU’s Traditional Specialties Guaranteed (TSG) registry meaning that only a pie created according to a specific recipe can be called a sklandrausis. You can usually get them at the Saturday market on Kalnciema iela and at the Central Market.

Although most local food won’t make it into any mainstream diets, with perhaps the exception of the Atkins plan, one has to keep in mind that for centuries Latvians toiled in the fields burning off thousands of calories a day, so it’s not so surprising that authentic local cuisine is designed for work horses, not office workers.
Labu apetīti (bon appetit)!

Peldu 19
/riga/folkklubs-ala-pagrabs_86876v
One of Riga’s largest Latvian beer bars and restaurants, Folk Club Ala is more of a cavern than a cellar. Descend into the depths of this huge space to find a …
see more
Latvian

Elizabetes 65
/riga/lido-vermanitis_10960v
A great place to eat a huge meal for cheap, this restaurant looks like medieval Europe and interwar Latvia collided and produced a unique space decorated with …
see more