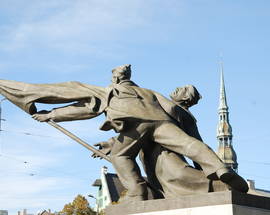 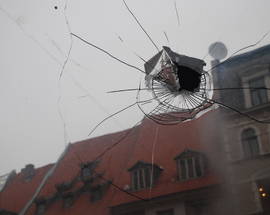 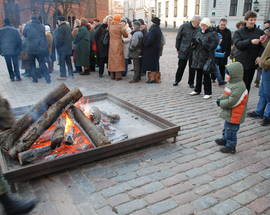 Could it be that the cold, damp, dark dreariness of January inspires feelings of dissatisfaction, rebellion and, dare we say, revolution in the hearts of Latvians? A quick glance at a history book, those antique receptacles of knowledge that people used before the internet, will answer this question with a resounding ‘hell, yes.’ That’s not to say that the locals will grab their pitchforks and flaming torches and go on a rampage while you’re drinking a mulled wine at the Riga Christmas Market, but over the past century or so civil unrest in the first month of the year has led to the collapse of governments, riots, reform, bloodshed, unparalleled heroism and hooliganism and even the pillaging of an innocent Latvijas Balzams alcohol shop.

13 January 1905
At the beginning of the 20th century, Riga was an important port city with a sizeable manufacturing sector. It was around this time that many of the city’s beautiful art nouveau buildings were erected and that Riga truly came into its own. Although we often hear of its incredible wealth during this supposed golden age, we rarely consider that Latvians, who were essentially second-class citizens in their own homeland, manned the factories, building sites and loading docks of the city. In short, without them, commerce would have ceased. The descendants of German crusaders controlled Riga and many of the vast estates in the countryside, while Russian bureaucrats implemented the tsar’s laws, policies and whims. Both nationalist and socialist ideologies had gained favour among the Latvian rank and file and the events of Bloody Sunday in St. Petersburg on January 9, 1905, when hundreds of peaceful protestors were slaughtered by their tsar, inspired Latvians to show their solidarity with the workers of the Russian capital by staging a strike during which meetings were held, songs sung and demands for greater autonomy made. This ominous powder keg was finally lit on January 13 when peaceful demonstrators met a Russian military force near the River Daugava. Shots were fired and panic ensued. Some demonstrators were killed by bullets and others fell through the ice in the river and drowned. All told, at least 70 perished and another 200 were injured. A decidedly Soviet statue with two proletarians hoisting a flag now approximates the spot where the carnage occurred and the street is also named after the incident – 13.janvāra iela. Rioting and armed conflicts continued throughout the countryside until the following January and many buildings and manor houses were pillaged or burned to the ground. Wealthy landowners went into hiding and rural schools began openly teaching Latvian, which was illegal. But Tsar Nicholas II eventually gained the upper hand and sent what was called a ‘punitive expedition’ of soldiers to what is now Latvia to bring fomenters of revolution to justice by imprisonment or execution. Many Latvian intellectuals and nationalists fled the country including Latvia’s first prime minister, Kārlis Ulmanis. The revolution failed, but the seeds of secession had been sown. By 1918, Latvia had declared its independence.

13 January 1991
After the Latvian S.S.R.’s Supreme Council voted on May 4, 1990 to restore Latvian independence with a transitional period, tension gripped the entire nation. While Latvians were attempting to regain their sovereignty, many local Russian-speakers didn’t approve of the idea of suddenly living in a foreign country and organised an anti-independence movement called Interfront. The Council began making new laws without the approval of the Kremlin and by January 1991 the spit began to hit the fan. Soviet special forces known as OMON seized the Preses nams printing house on January 2 to stop the publication of democratic pro-independence materials. Things further escalated when Mikhail Gorbachev ordered extra troops to reinforce the Baltics five days later. Meanwhile Interfront organised an anti-independence demonstration asking for the Latvian government to resign. Latvians retorted by calling for a mass demonstration in support of the government on January 13, but events in Lithuania soon took centre stage, when OMON troops seized the Vilnius TV tower killing 14 and wounding over 100 unarmed demonstrators. Latvians rallied and erected makeshift barricades in Old Riga to protect the Parliament, Latvian Radio and other strategic institutions. People from all over the country arrived in Riga with tractors and lorries to block possible attacks by tanks. Hundreds manned the barricades in freezing weather singing songs and dreaming of freedom. OMON forces claimed their first victim, R. Mūrnieks, on January 16, but more would follow in the coming days culminating in an attack on the Ministry of the Interior during which five innocents were killed including Latvian journalists filming the event. Despite the beginning of the First Gulf War, their footage was shown by news agencies around the globe. In March, 73% of the population voted in favour of full independence which was achieved after the Moscow coup failed in August. To learn more about the Barricades visit the Barricades Museum. Various events commemorating the 1991 barricades will occur in Riga on January 20 including bonfires on Cathedral Square symbolising the many fires that were lit to keep Riga’s protectors warm on freezing January nights.

13 January 2009
What started as a peaceful demonstration by 10,000 concerned citizens ended in a riot worthy of an Athenian student street party. A rally was organised on Cathedral Square to let parliamentarians know that the people were unhappy with some of the ruling coalition’s unpopular actions such as bank bailouts. After speeches, and the inevitable singing that goes along with any Latvian demonstration, most of the people left the square for the warmth of their homes. However, a small contingent of roughly 100 anarchists, Bolsheviks, inebriated hooligans and other assorted idiots began rioting. Cars were vandalised, windows were smashed and heavy Old Riga cobblestones were hurled at police and unsuspecting journalists. Arrests were eventually made and most of the broken glass had been replaced by the end of business the next day. The biggest victim appeared to be a Latvijas Balzams alcohol shop and its flustered cashier. Beer, vodka and wine were pilfered in large quantities but the mob of undesirables didn’t touch the top-shelf liquor, an obvious indication of their lack of erudition.