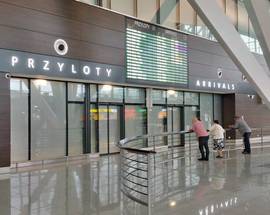 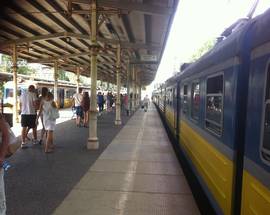 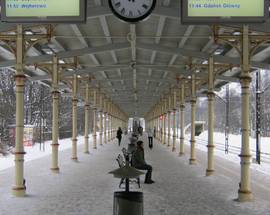 Sopot does not have its own international bus station so you will either be dis-embarking in Gdynia or Gdańsk bus stations and travelling to Sopot via the local SKM commuter train, which leaves from the railway station. In both Gdańsk and Gdynia, the railway station forms part of a complex with the bus station meaning that you will not have to travel far to get to the train. See the Getting to Sopot section in Sopot In Your Pocket for details.

There are three main routes leading directly to Gdansk, Sopot and Gdynia: the E28 from the west; the E75 from the south; and the E77 from the east. The E28 brings you to the tri-city via Gdynia in the north while the E75 comes via Gdansk in the south. The A1 dual carriageway makes the final hour's journey a lot less frustrating as you now bypass Tczew. Finally there is the E77 from Warsaw which will bring you into the city via Gdansk. If Polish roads and other drivers don't encourage you to keep an eye on your speed, remember that Polish police are lurking by the roadside ready to slap you with a fine.

Whether you are arriving from the south (Gdańsk) or the north (Gdynia) you are very likely to make the approach to Sopot via the main Al. Niepodległości road. This can be very busy during peak times. Sopot city centre is quite small and, particularly during the summer months, the centre is snarled up with traffic. There is street parking if you can find it with the area closest to the centre subject to parking tickets. There are guarded car parks which you should seriously consider if leaving your car for a prolonged period.

The Tri-city can now boast a very impressive airport, co-owned by the three cities, around which you’ll see lots of new industry sprouting. The area was open countryside not very long ago and the expansion of the airport, the accompanying business and the construction of a new railway link to Gdansk and Gdynia are a sure sign of a region on the up. It also makes Gdynia’s attempts in recent years to build its own airport even more questionable.

The city is connected to all major cities in Poland with travel times subject to both delay and improvement as a major investment programme continues.