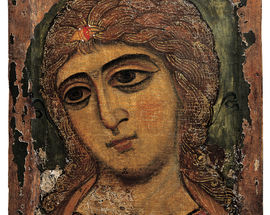 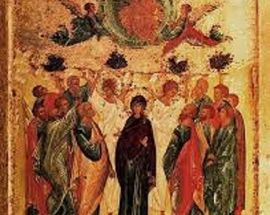 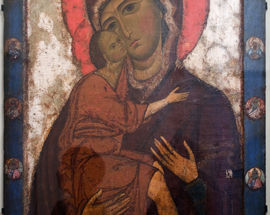 By officially accepting Christianity in 988, Ancient Rus' also accepted the Byzantine culture thanks to which religious art appeared in the country. The period between the 10th and 17th centuries is considered the Middle Ages era in Russian history. During this time, religion played a central role in the country. A large amount of churches and cathedrals were built, adorned inside with mosaics, frescas and, of course, icons.
Nowadays, the most valuable icons are usually kept in museums because these organizations can provide them with the best care. The technique of icon painting employs tempera on gesso board. In order for the icon's colors to be brighter, it was often covered with a layer special drying oil but, unfortunately, after about 70-100 years this oil became darker and darker. It was often removed and the darkened areas were painted over. One can say that the icons that we can see in museums today were "restored" for the first time already hundreds of years ago.
Radical reforms introduced by Peter the Great in the first quarter of the 18th century led to a sharp decline of religious art. Icons were no longer admired as a work of art and the especially worshipped ones were not restored and, therefore, became so dark that one could only with great difficulty make out and forms or objects. Oftentimes icons were referred to as "black boards" and interst towards them as collectible pieces of art was close to non-existent. An interest in ancient Byzantine art first arose at the St. Petersburg Academy of Arts and so pieces of such art began to be collected and used as educational material. However, at the turn of the 20th century the demand for ancient Russian art began to grow and members of the royal family as well as private collections began to acquire old icons. The imperial collection is now displayed at the Russian Museum and numbers more than 5,000 pieces of ancient Russian art.
The oldest icon on display at the museum's exhibition emanates from the 12th century and is called "Gold-haired Angel" ("Archangel Gabriel"). It is assumed that this icon was painted for a Russian church by a Byzantine master and its name comes from the little strings of gold that the angel has in his hair. These strings symbolize the Kingdom of Christ.
Some of the most renowned icon painters of Ancient Russia include a monk by the name of Andrey Rublev and his follower Dionisy. Both exhibited a complex approach to their work: decorating cathedrals with frescas and creating icons for the iconostasis. Andrey Rublev gained fame after completing the iconostasis for the Uspensky Cathedral in Vladimir (two of the icons from it are displayed at the Russian Museum).
The State Russian Museum

Nab. kan. Griboedova 2
/st-petersburg-en/benois-wing-russian-museum_10323v
The project of Benois Wing was executed by the architects L. Benois and S. Ovsyannikov in 1910-1912. Originally the building was purposed for different …
see more
The State Russian Museum

Inzhenernaya ul. 4
EDITOR'S PICK
/st-petersburg-en/mikhailovsky-palace-russian-museum_141314v
The Mikhailovsky Palace is the traditional epicentre of the Russian Museum, built in 1825. Located within the historic centre of St. Petersburg, it is a fine …
see more
Editor's pick
The State Russian Museum

Sadovaya ul. 2
featured
/st-petersburg-en/st-michaels-castle_9779v
The history of St. Michael's Castle goes back to 1797 when construction of an imperial residence in the historic center of St. Petersburg began. By 1801 the …
see more
Featured
The State Russian Museum

Nevsky pr. 17
featured
/st-petersburg-en/stroganov-palace_141112v
In the west, the fame of the Stroganov family largely revolves around their christening of a dish comprised of cream and brandy. They were, however, at one …
see more
Featured
The State Russian Museum

Millionnaya ul. 5 bldg. 1
featured
/st-petersburg-en/marble-palace_141118v
The Marble Palace has long been a centre for cultural exploits in the capital. It was built in 1785 by Antonio Rinaldi for Ekaterina II’s favorite Graph …
see more
Featured