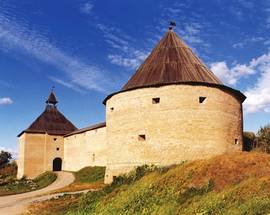 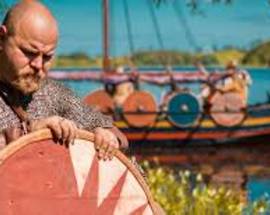 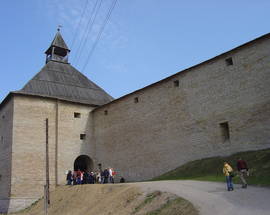 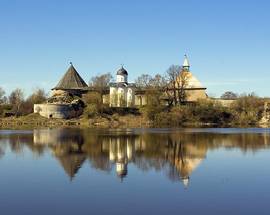 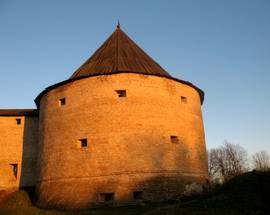 Staraya Ladoga is a town that was founded in 753 and is still in competition with Novgorod for the title of the first capital of Russia. It is a place of archeological discovery and is surrounded by a national park that preserves its 12th-century layout (if you overlook some of the Soviet block housing) with an ancient fortress, six 12th-century churches and beautiful monasteries. To the north the town has ancient burial mounds. Staraya Ladoga played an important role in uniting the lands of the Northern and Southern Rus.

Getting there:
With the exception of package tours, there is no direct transportation from St. Petersburg to Staraya Ladoga.
For the most efficient route, you should first take an elektrichka (commuter train) from Moscow station or Ladozhsky station in St.Petersburg to Volkhov (Volkhovstroi Station). For a train timetable, see www.pass.rzd.ru.
In Volkhov take bus 23 to Novaya Ladoga. The bus fare costs 32Rbl, and it takes about 20 minutes to get to Staraya Ladoga, where it makes three stops before continuing to Novaya Ladoga. The most convenient is the second stop which is near the fortress. In all, the journey should take about three hours.

Staraya Ladoga, Volkhovsky pr 19
featured
/st-petersburg-en/fortress-in-staraya-ladoga_142473v
The first stone fortress in Ladoga was built in the 9th century by Prince Oleg, but was destroyed soon after in 997 by the Norwegian prince Erik. The town …
see more
Featured
Staraya Ladoga

Staraya Ladoga, Volkhovsky pr 19
/st-petersburg-en/Archaeology-museum-Staraya-Ladoga_142484v
This museum was founded on 15th July 1971 and has, since then, been a storehouse for the objects that have been found on the yearly summer archaeological …
see more
Staraya Ladoga

Staraya Ladoga, Nikolskaya ul. 16
/st-petersburg-en/Nikolsky-Monastery-Staraya-Ladoga_142482v
This monastery was built around the church of Nikolay the Miracle Worker, which was built at the end of the 12th century and restored to its current state in …
see more
Staraya Ladoga