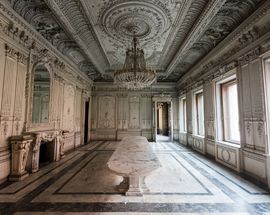 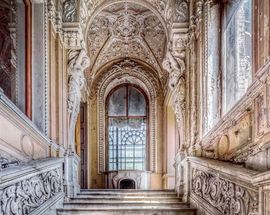 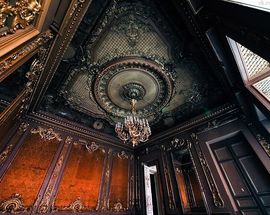 The first stone house on the corner of Kozhevennaya Liniya on Vasilievsky Island was built in the 1770’s. At around the same time, Catherine the Great decreed that tanneries be established in the area. In 1844, the house was bought by the merchant Nikolay Brusnitsyn, who then opened the Brusnitsyn and Sons Tannery. A few years later, the mansion was reconstructed, expanded and slightly remodelled to accommodate for additions such as a winter garden and a large conservatory with glass panes between elegant wrought iron frames. The interiors, largely intact today, include the white ceremonial hall the Louis XV with particularly rich gilded stucco work, the formal dining room with its extraordinary carved oak ceiling and the intricately patterned Moorish smoking room.

As with most mansions, following the 1917 Revolution the Bolsheviks nationalized and repurposed it. The Brusnitsyn Mansion was used to house the factory administrative offices and some workshops. The factory continued to operate until the mid-1990’s and since then the building's future has been uncertain. But what is certain is that it’s one of St. Petersburg’s greatest hidden treasures.