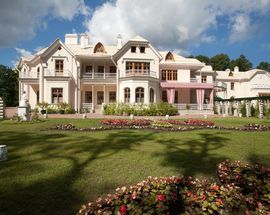 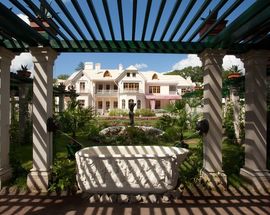 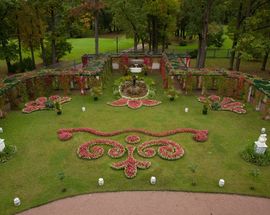 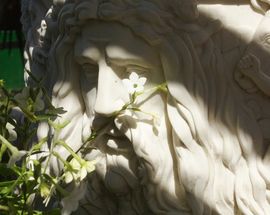 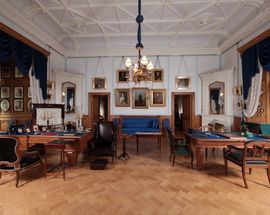 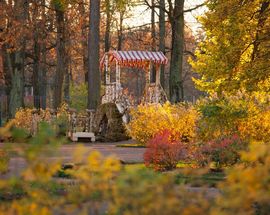 After The Cottage Palace was built, the family of the Emperor Nicholas I traditionally spent summer months in Alexandria. To further emphasize the idyllic character of the country residence, by the decree of the Emperor, in 1831, the main creator of the palace and park ensemble, the architect Adam Menelaws, constructed a Farm with a barn, rooms for the shepherds, kitchens and pantries. The purebred cows were ordered specially from England, that provided the family with dairy products, and even the shepherd was an Englishman. It was a modest rural house with the roof, painted in the colour of straw, and surrounded by galleries on pillars looking like birch trunks. Over the next two decades, the building was reconstructed several times under the supervision of the architect, Andrey Stackenshneider.

The design of the Farm palace interiors, just like the other constructions on the territory of Alexandria Park, is executed in neo-Gothic style. Some elements of its original finish have preserved: stucco works, the fragments of paintings on the walls and ceilings, fragments of the oak parquet floor, stoves, fireplaces and staircases.

Peterhof, Sankt-Peterburgsky pr. 1
featured
/st-petersburg-en/alexandria-park_155626v
The palace and park ensemble Alexandria was a favorite summer vacation spot of four generations of the Romanov dynasty. It adjoins to the eastern border of the official emperor's residence. The parkland was named after Alexandra Fedorovna, the wife of Ni
see more
Featured

Peterhof, Park Aleksandriya 18
featured
/st-petersburg-en/cottage-palace-in-alexandria-park_155776v
The Cottage Palace was designed to be a private retreat for Nicholas I and his family. As the name implies, the estate itself was designed in the English manner, more specifically the Gothic style of the 1820s. A simple, unassuming two story exterior, be
see more
Featured

Peterhof, Park Aleksandriya 21
/st-petersburg-en/alexander-nevsky-gothic-chapel_148029v
After the Cottage Palace was completed, the need for an Imperial place of worship arose. Complementing the residence's English gothic style, the multi-spired Gothic chapel was completed between 1830 and 1834. Decidedly medieval in its lofty arches, slend
see more