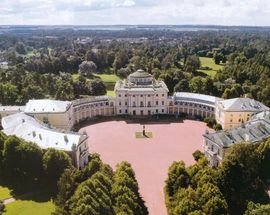 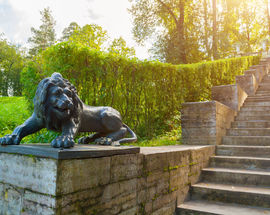 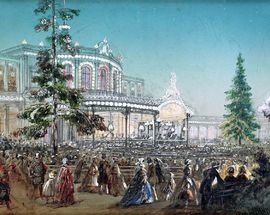 Catherine the Great began to construct a palace at Pavlovsk for her eldest son, Paul, later the Emperor Paul. She began building an Imperial residence in Pavlovsk in 1777. She invited the man who was later to become her favorite architect, Charles Cameron, to come from Scotland to construct a palace in Pavlovsk. Charles Cameron arrived in Russia in 1779. He was an ardent admirer of the great 16th century Italian architect Andrea Palladio, whose creations displayed a whimsical interlacing of modern ideas with the heritage of Ancient Rome. Cameron began his activities in Russia with the erection of the Temple of Friendship in Pavlovsk, which the young heirs to the throne – Paul and his wife Maria Feodorovna – dedicated to Catherine II. His next task was the construction of the Apollo Colonnade at the entrance to the park, followed by the Dairy and a number of other buildings.

In 1787 Paul and Maria made the decision to build themselves some permanent stone houses. Working on this commission, Cameron took as a basis one of the Italian palaces depicted in Andrea Palladio's famous publication “The Four Books of Architecture”. He designed a similar palace in Pavlovsk on the top of a hill that descended sharply down into the spacious valley of the river Slavyanka. The architect planned a modest palace, a three-storey main building crowned with a cupola, extremely reminiscent of his earlier creation, the Temple of Friendship. Adjacent to the central building were two small semi-circular galleries with in-built auxiliary wings. These semi-circular galleries formed a wide parade ground. Their interior decor was intended to comply with modern tastes and fashions.

Paul favored as his residence Gatchina to Pavlovsk, and therefore, since 1788 the latter was managed by his wife who had contributed most to its well-being. Maria Feodorovna enjoyed animal husbandry (she used to milk cows herself) and thus built a large farm at the edge of the park and a wooden pavilion for studies. She was also a skilled artist, a member of Berlin Academy of Arts, and her numerous handicrafts still remain in the palace. A large collection of books was accumulated in the palace by her efforts. In 1796, the village received a status of a town and renamed to Pavlovsk.

After the October Revolution of 1917, the Pavlovsk Palace and Park were nationalized and converted to a public-access museum. Pavlovsk suffered much from the German occupation during World War II. Restoration works started in 1944 and were completed by 1973 and in 1989, it was included into the UNESCO list of World Heritage Sites.

Nowadays about 1.5 million tourists visit Pavlovsk annually. The small town hosts the fascinating Pavlovsk Palace, encompassed by a huge 1,500 English-style acre park. Tall trees, winding streams and endless paths scattered with classical statues and flanked by benches make for many a secluded spot. The perfect place to get away from the hustle and bustle of the big city!