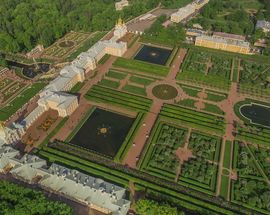 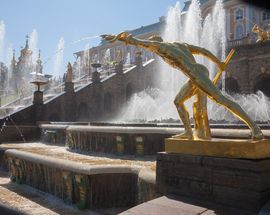 Accurately referred to as the “Russian Versailles”, Peterhof is one of Russia's number one tourist attractions. It is particularly spectacular from late-May to mid-October, when the 147 fountains are turned on, but even so it is well worth visiting at any other time of year.

The Great Palace was built between 1709 and 1724 under the directions of Peter the Great. The seaside paradise was built as a grandiose triumphal memorial glorifying the grandeur of Russia in conquering the much needed and desired access to the Baltic Sea during the Great Northern War. Although Peterhof is the creation of Peter the Great – more than ten of his handmade drawings in reference to Peterhof along with numerous sketches with his notes have been preserved – the tsars and tsarinas that followed each wanted to make their own mark, adding another palace or fountain to the grounds.

In 1917, following the Russian Revolution, Peterhof became a large educational center. During World War II, the German occupiers destroyed the palaces and the park. The reconstruction began from the first days of the liberation. Thanks to the work of military engineers as well as over 1,000 volunteers, the Lower Park opened to the public in 1945 and the facades of the Grand Palace were restored in 1952. Today, this nature and man-made masterpiece welcomes guests, impressing and surprising them, just like before. In 1990, Peterhof was included in the world's list of intangible cultural heritage of UNESCO and in 2008 was recognized as one of the seven wonders of Russia.