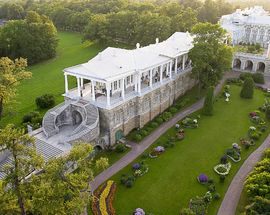 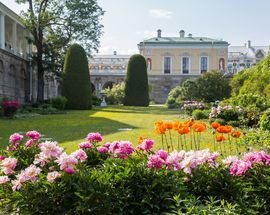 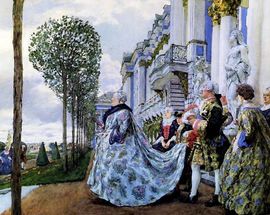 The history of the palace and park ensemble of Tsarskoye Selo is closely connected with the liberation from Swedish rule of the old Novgorodian lands on the banks of the River Neva, the founding of St. Petersburg and its establishment as the capital of the Russian Empire.

The site that would become Tsarskoye Selo appears on Swedish 17th century maps as a small estate known as “Sarishoff” or “Saarismoisio” (translated from the Finnish “the manor on an elevated spot”), and in Russian as “Sarskaya Myza”. Immediately after the end of the Neva campaign, the manor was given to Alexander Menshikov, who was appointed governor general of the liberated territory. Not long afterwards, however, Peter the Great transferred it to his future wife Catherine.

The creation of a royal residence in place of the estate began in the 1710’s and continued into the 1720’s. Nearby, a village popped up, as well as a housing area for the court servants. Soon Sarskaya Myza was renamed Sarskoye Selo (selo means “village”) and when construction of the palace began, it acquired the elevated title of Tsarskoye Selo – “Tsar’s Village”. For two centuries Tsarskoye Selo was a grand imperial summer residence, the construction of which was a matter of state importance and involved numerous departments of the government.

After the October Revolution of 1917, the palace and park ensemble was turned into a museum and the Bolshevik authorities took over the best buildings in the town as educational and health establishments for children. As a consequence, when the town was renamed in 1918, it became Detskoye Selo – “Children’s Village”. On 9 June that same year the Catherine Palace was opened to the public as a museum. In 1937, when the country marked the 100th anniversary of the tragic death of Alexander Pushkin, the town where the future poet had received his education in the Imperial Lyceum was renamed after him. Finally, in January 1983 the palaces and parks in the town of Pushkin were given the status of a preserve and in 1990 this became the Tsarskoye Selo State Museum Preserve.

Today, Tsarskoye Selo palace and park ensemble is a superb monument of world-ranking architecture and garden-and-park design dating from the 18th to early 20th centuries. A whole constellation of outstanding architects, sculptors and painters made the ideas of their crowned clients a reality here (Braunstein, Rastrelli, Quarenshi, Monighetti, Rinaldi, Melzer and Menelaws just to name a few). Tsarskoye Selo is a cluster of very fine examples of Baroque and Classical architecture and it was also the first place in the Russian capital where interiors decorated in the Moderne (Art Nouveau) style appeared.

Apart from permanent exhibitions like the splendid interiors of the Catherine Palace and other themed displays, the Tsarskoye Selo State Museum organizes various temporary exhibitions devoted to the history of the Imperial estate and the Romanov dynasty so make sure to check the website to see what’s on.