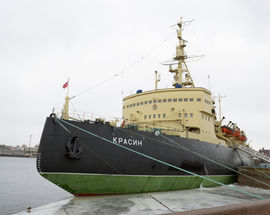 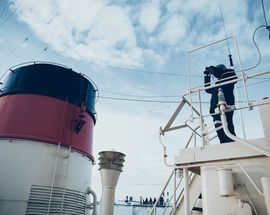 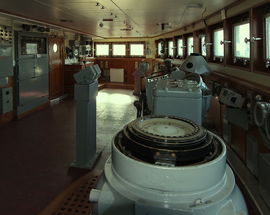 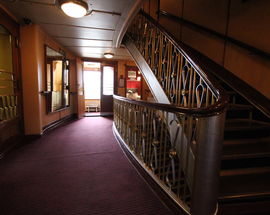 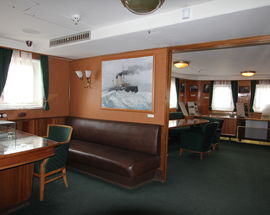 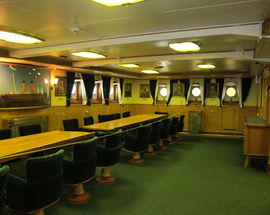 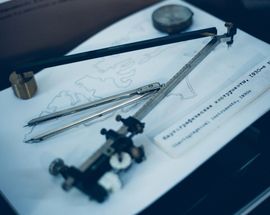 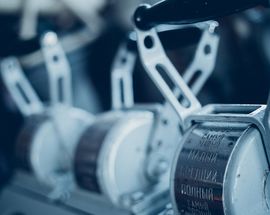 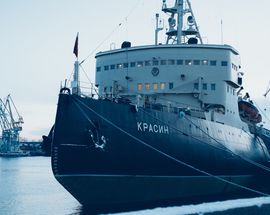 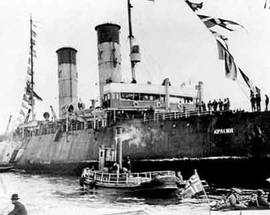 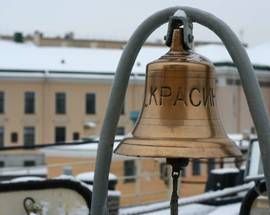 Originally named the Svyatogor, the Krassin has certainly left a long history in her wake. Built in Newcastle upon Tyne in England and launched in 1916, the icebreaker was the most powerful vessel of its type in the world right up to the advent of the nuclear-powered era in the 1950s. The Krassin was primarily deployed for pathfinding, exploration and rescue missions, but also served as a warship during World War 2. At the end of hostilities, she was disarmed and returned to peacetime duties, and crunched through her last icefloe in 1998. Since then, the Krassin has bobbed contentedly at anchor on the banks of the Neva, insofar as anything that weighs 10,000 tonnes can be said to 'bob'.

The museum does not allow single visitors, so you will need to wait for one of the tours. These are conducted every fifteen minutes, so waiting isn’t really an issue. We must warn you that the Krassin is not as adapted to tourists as some other museums in St. Petersburg: everyday tours are only given in Russian, and information in English is, for now, scarce. Certainly, just being on board is an unforgettable experience in itself. But you also can book an excursion in advance in English, German, Spanish or Italian. Via phone (+7) 812 325 35 47.

Admission 700Rbl. Excursion should be booked in advance.

VO, Bolshoy pr. 16
EDITOR'S PICK
/st-petersburg-en/vasileostrovsky-market_162224v
In the last five years St Petersburg has become a top destination for gastronomic tourism. The geniuses of Petersburg’s culinary school are defined by innovative approach, treating creating new dishes as a form of art, and something else – elusive and me
see more
Editor's pick

Shkipersky protok 10
/st-petersburg-en/submarine-d-2-narodovolets_53162v
Put into service in 1931, the Narodovolets is one of the first submarines to be built by the Soviet Union and as you will see from the many photos in the adjoining museum, this little sub took part in the defence of Leningrad and saw many lives lost due
see more

The icebreaker Krassin is the best way to feel the history of Russia. You can see the changes of the centuries in this museum. Also it is the best way to see the city from the upper deck and to feel yourself as a real seaman!!!
Take your guide with you Download a pdf