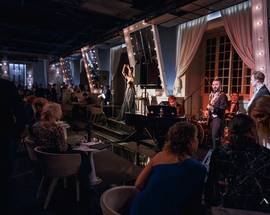 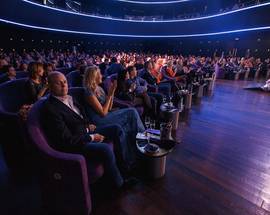 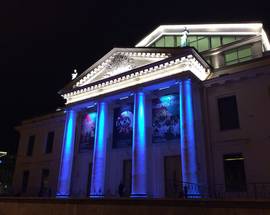 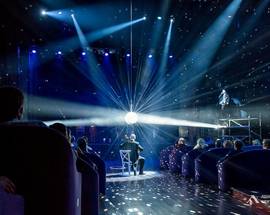 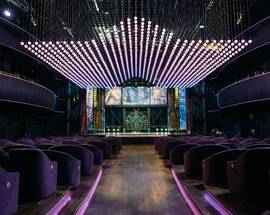 St. Petersburg’s Leningrad Centre, housed in a historic exhibition hall on Potemkinskaya ul. near Tavrichesky Garden, is a contemporary shrine to the city’s longstanding cultural, artistic and social traditions. Built in 1914 to the early 20th century trend for exhibition spaces, the building then went unoccupied for close to 50 years before being re-envisioned in 1959 as a panoramic cinema theatre seating over 1000 patrons and boasting the largest screen in the country. The end of 2014 saw the unveiling of the entertainment complex as it stands today, making it the first of its kind in Russia.
The centre is akin to other international urban cultural venues, outfitted with two stages, a gallery and restaurant, and therefore able to host a vast collection of cultural events. State-of-the-art multimedia technologies and technical equipment allow for dynamic performances of vocals, circus stunts, drama, comedy, improvisation, physical theatre and live music on the stage; the gallery offers visitors the chance to cast their eyes over the largest video wall installation in Europe; and the Blok restaurant on the roof with a view of Tavrichesky Garden offers Russian fine dining in avant-garde Leningrad surrounds.

Leningrad Center, Potyomkinskaya ul. 4
/st-petersburg-en/blok_142905v
Calling all meat lovers! Your culinary heaven awaits you on the last floor of "Leningrad Center" in the quiet Tavrichesky Garden. This eatery boasts the most extensive steak and meat menu we've seen and uses only Russian farmer's market meat of the highe
see more