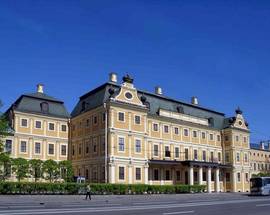 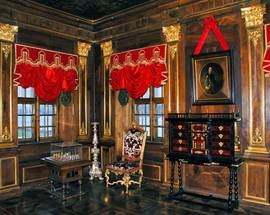 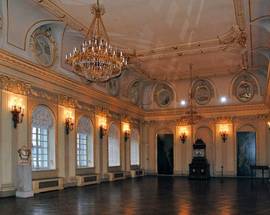 The Menshikov Palace on Vasilyevsky Island was one of the very first buildings in St. Petersburg. The palace was founded in 1710 as a residence of St. Petersburg Governor General Alexander Menshikov. Many western European architects and craftsmen were involved in the project, including Francesco Fontana, Johann Gottfried Schädel, Domenico Trezzini, Carlo Bartolomeo Rastrelli, Georg Johann Mattarnovy and Jean-Baptiste Leblond.

It was opened in 1711, but the construction continued until 1727, when Menshikov with his family was exiled to Siberia and his property was confiscated. In 1731, Cadet Corps were established and occupied the palace and neighboring buildings. At the end of the 19th century the Menshikov Palace was restored and became the Museum of the Corps.

The palace is an outstanding example of Petrine Baroque architecture, with characteristic symmetry and simplicity of dimensions, high gabled roofs, two-toned facades and small glass windows. The exterior walls are decorated with pillars and on the top of the risalits of the central building there are gables with enormous regal crowns. The grand entrance takes the form of a stone portal, accentuated by a portico above which a balcony is set. It's now a branch of the Hermitage and the beautifully decorated rooms display early 18th century art, as well as some of Peter's work-tools.

Admission 300 Rbl. 700Rbl. — price for all-in ticket for visiting the Main Museum Complex, The General Staff Building, Winter Palace of Peter the Great, Menshikov Palace, The Museum of the Imperial Porcelain Factory. Entry ticket allows single visit to the Main Museum Complex and the branches during the day of its purchase. Please keep your tickets with you until the end of your visit.

Dvortsovaya pl. 6-8
EDITOR'S PICK
/st-petersburg-en/general-staff-building_147730v
The General Staff Building is home to one of the most celebrated and popular parts of the Hermitage's collection - impressionists and post-impressionists. The building was desig
see more
Editor's pick

Dvortsovaya pl. 2
EDITOR'S PICK
/st-petersburg-en/hermitage_10144v
The director of the Hermitage once said, “I can't say that the Hermitage is the number one museum in the world, but it's certainly not number two.” With over three million works of art and treasures housed in six connected buildings along the Neva, the m
see more
Editor's pick

VO, Bolshoy pr. 16
EDITOR'S PICK
/st-petersburg-en/vasileostrovsky-market_162224v
In the last five years St Petersburg has become a top destination for gastronomic tourism. The geniuses of Petersburg’s culinary school are defined by innovative approach, treating creating new dishes as a form of art, and something else – elusive and me
see more
Editor's pick

Winter Palace of Peter the Great

Dvortsovaya nab. 32
featured
/st-petersburg-en/winter-palace-of-peter-the-great_147729v
Exhibition complex of the State Hermitage. The Winter Palace of Peter the Great is a unique architectural monument of the first quarter of the 18th century. The official residence of Peter I was located on the territory now occupied b
see more
Featured

Museum of the Imperial Porcelain Factory

Pr. Obukhovkoy Oborony 151
/st-petersburg-en/museum-of-the-imperial-porcelain-factory_147731v
Since 2001 the Museum of Imperial Porcelain Factory has been run by the Hermitage’s management and today it boasts a stellar display of more than 30,000 various designs the factory has produced since its founding in 1844 by Tsar Nicholas I and will appea
see more

Zausadebnaya ul. 37a
/st-petersburg-en/staraya-derevnya-restoration-and-storage-centre_147732v
The modern Restoration and Storage Centre of the State Hermitage Museum is situated in the Staraya Derevnya area. This museum complex offers the unique opportunity to visit the museum’s storage vaults and see paintings and sculptures from the museum coll
see more