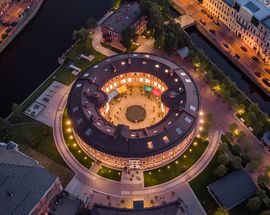 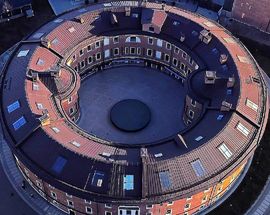 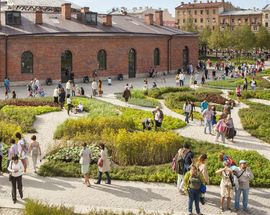 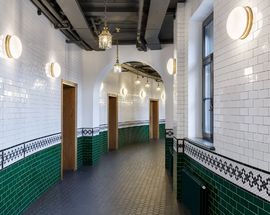 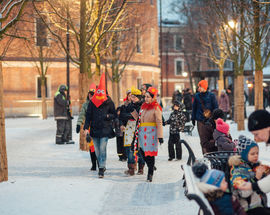 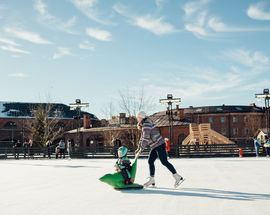 New Holland harbours all but 16 years of St. Petersburg’s history and so visiting there allows for a true immersion in the city’s past. Construction on the island began in 1719 when Peter the Great set about transforming the swampland into a naval base. This site was chosen after the Kryukov Canal and Admiralty Canal were constructed in order to connect the Moika River with the Neva. Since then, New Holland has been witness to countless wars, the 1917 revolution, the rise and fall of the Soviet Union and of course, the transformation of St. Petersburg from swampland into the creative capital it is today.

A little bit of history
The history of New Holland is rich and varied. The inception of the triangular structure as it stands today began back in the 1730s under the auspices of Peter the Great. Seeking to build St. Petersburg up from the swampland, Peter the Great invited Dutch shipbuilders to work in the shipyards on the left hand bank of the River Neva. The area was colloquially nicknamed ‘New Holland’ and there are various theories behind the name. Some say it was named as such after the many Dutch shipbuilders who worked there but another theory suggests that it was named after the distinctly Dutch design of the barracks. New Holland underwent numerous stages of construction as well as renovation, beginning in 1732 under the control of the navy. One of the reasons the complex took so long to build, is that it so frequently changed architectural hands. Tracing the many names who are associated with New Holland’s designs is comparable to following a Game of Thrones style battle for control of the final project. One architect, Johann Gerard even ‘accidentally lost’ blueprints of which he didn’t approve! Structures of New Holland include the naval prison built in the early 1800s in response to the Decembrist uprising. The prison is a rounded form, which earnt it the nickname ‘The Bottle’, which is where the Russian expression ‘stay out of the Bottle’ came from.

The history of the complex took an interesting turn in 1890 when one of the buildings was converted from a one-storey meat locker into a Navy laboratory. Not only that, but the first water tank of Russia was built there to test out ships, the 6th of its kind in the world.

The water tank is the site where practically every model of ship or submarine was tested between 1910 and 1914, as well as seaplanes, which were invented in Russia. When in 1915, a radio station was installed on the island of New Holland, no one could have known that just two years later it would be the site of one of the most pivotal moments in Russia’s history. It was there on 9th November 1917, that Vladimir Lenin aired his earth-shattering broadcast which announced the start of the revolution.

During World War Two, New Holland was unsurprisingly significantly damaged by artillery fire, hit by more than seventy rounds of shelling and by more than ten bombings. Following the collapse of the Soviet Union, New Holland became a huge undertaking which was passed from one company to the next. However, each time, the future of the island fell victim to the events of the 20th century and for a long time the vision of its restoration was not realised.

Finally, in 2006, a competition was held to find the renovators of New Holland. The winners were Shalva Chigirinsky and Igor Kesaev, of CT Company, whose creative vision imagined a multi-faceted complex which was home to theatres, conference halls, galleries, hotels and restaurants. Plagued with bad luck, this plan for New Holland was never realised. The story however did not end there, and in 2010 a competition was held to find an investor in New Holland’s continued reconstruction. Millhouse won the bid and committed themselves to the ongoing renovation and restoration of the fascinating complex. Following that, the Iris Foundation organised a competition for architectural bids, and the American firm WORKac was appointed as consultants for the continued project. The fruits of that appointment are now visible as New Holland reopened in August 2016.

Summer Place
Since 2010, plans have been underway for a total renovation of the New Holland complex, to install museums and exhibition halls and educational facilities. Some of these projects are still a work in progress, but in the meantime, the island has plenty to offer.

In summer visitors are able to enjoy public art displays, cafes, athletics fields, exhibitions, lectures, open-air markets, children’s parties and a whole host of other celebrations. New Holland has been rapidly transformed from a navy-owned structure with an embattled history, to a beautiful open space that can be enjoyed by all. The Iris Foundation who are cultivating this contemporary hub are truly taking advantage of the space offered on the island; in the parks there are cultural programmes on offer as well as sporting events, educational hubs and food stalls.

Summer at New Holland is always busy. The structure of New Holland may not seem entirely clear, but to give you a taster, think yoga on the grass, street food in the sun, table tennis, pop up art and sunbathing in one of the most historical sites of St. Petersburg. In the words of Dariya Zhukova herself, ‘Today we have an outdoor space, which dictates its own content: there is a park, where you can lie on the grass, a market with street food and vintage clothes, a shop with organic produce, a community garden and a site for rock-concerts and plays.’

Cultural Life
If the early history of New Holland was complicated, the recent history cannot be described as smooth either! Attempts to restore and renovate the space since 1997 have been thwarted by design and funding problems. Finally though, under the guiding hand of the Iris Foundation, a successful plan to revive the island is well underway. Imagine a space where nature meets architecture and history meets the present day. This is the vision for New Holland, where the Foundry, which is oldest building on the island, converted into a social hub with lectures, film screenings and DJ-sets. Contrast the magnificent buildings that form the iconic triangular frame of the complex, with green lawns lined with alleys of trees and wildflowers. New Holland has become a second home to St. Petersburg locals, which suits the creative crowd that reside in the northern capital of Russia. Picture comfy relaxing cafes where you can spend the day working, listening to music, holding meetings or simply having a coffee and soaking up the atmosphere. The design will emphasise this ‘home from home’ concept by decorating the interiors to resemble pre-revolutionary St. Petersburg apartments.

Another imaginative creation is the transformation of the building that was once a prison (The Bottle), into a four story centre, designed to entertain people of all ages. The first floor is home to cafes, featuring many well-loved restaurateurs from St. Petersburg and Moscow. The second floor is the creative floor, focused on design and fashion, with an outpost of the Garage Museum of Contemporary Art, bookstores, antiques and a comic book store. To relax and revitalise after an exhausting day of strolling the grounds and grazing on food, the third floor offers a health and beauty zone, with salons and a yoga studio.

Finally, inspired by Garage’s dedication to educating children, a nearby building called Commandant’s House became every child’s heaven. There, they are able to spend the day in the educational club, learning about media, 3D modelling, photo editing, contemporary art and a host of other creative skills.

New Holland turns into a magical spot also during the winter. Lighting up the dark months, New Holland becomes home to a skating rink with a natural ice surface, with music and a program of special events that brings the festive spirit to the island. The future for New Holland is both innovative and unusual, and we are waiting with anticipation for the complex to be unveiled in full. We could not even begin to detail all the exciting projects New Holland has in store, so keep an eye out for their future developments. Take yourself down to the hub of history, culture and creativity and explore one of the first and most fascinating parts of St. Petersburg.

Nab. Admiralteiskogo kan. 2
featured
/st-petersburg-en/new-holland_148600v
Edged by canals, and covering an area of 7.6 hectares, New Holland Island was created in the time of Peter the Great as a center for shipbuilding. Over …
see more
Featured