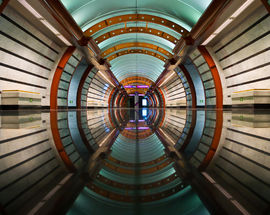 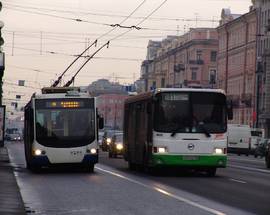 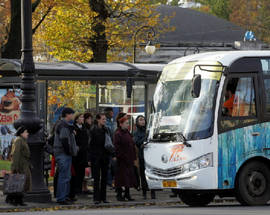 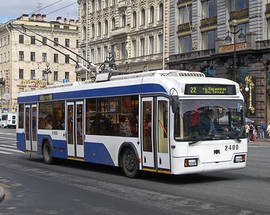 St. Petersburg has excellent public transport. The metro system is amazing – both attractive and efficient – and is the fastest way to get across town or into the centre of the city. If you find Cyrillic a bit of a squiggle, you’ll love the metro as it has transliterations for all the stations. To navigate your way from the metro station to your destination you have a choice of buses, minibuses (mashrutky), trolleybuses and trams – these are less user friendly but once you know the routes and when to get off, they make getting around the city a breeze. If you want to hop into something a little more comfortable, you can always take a taxi.

Petersburg residents get around the city using a variety of transport options. The fastest and most efficient is the metro. On above-ground transportation you can buy tickets from the conductor or driver (40Rbl for bus, tram, trolleybus) and up to 40Rbl for a marshrutka (mini-bus). All forms of transport work from around 06:00 to just after midnight.
Official taxis are inexpensive by European standards.

St. Petersburg's metro is one of the deepest in the world and one of the most beautiful. Central stations and those on the red line are particularly impressive, featuring tons of Soviet symbology in bronze, glass and stone. It's also fast and efficient and, during peak time, you won't need to wait more than three minutes for a ride. The metro runs from 05:30 till around 00:30. First, you'll need to buy a token (zheton). Zhetons cost 45Rbl and can be bought from the window labelled kassa. There are five different metro lines, and to change lines, you usually need to change stations. There are underground passageways linking adjacent stations like Sadovaya/Sennaya Pl. and Nevsky pr./Gostiny Dvor. When you arrive at a station, it can be difficult to see the name of where you are. You will hear the arrival station announced, followed by the name of the next stop. This can be confusing, so it's best to count your stops. In rush hour, the metro can get a bit hectic and it's at this time you can see Petersburgers at their very worst: pushing, shoving and queue-cutting. It’s said that some babushkas sharpen their elbows especially for the metro.

Buses and trolleybuses are another option and they have the advantage of allowing you to take in the architecture of the city, sometimes very slowly and often over the leather-covered shoulders of a local commuter. Scrolling banners above the driver’s cabin will list the next destination. Many also feature pre-recorded announcements for the current and following stop. Routes are indicated on window placards positioned on the side of each bus and trolley.

The marshrutka is a mini-bus taxi which follows a fixed route. The marshrutka concept emerged in the 90s as a reaction to overcrowded public transport. These days, they go just about everywhere within the city and out to the suburbs. Sadly, they no longer run on Nevsky, which disconnects them from much of the centre. They have set departure points, but otherwise, when you see the number you want, just hail it down like a taxi. To pay, hand your fare to the driver or to the person in front of you. When you want to get off, yell out loudly, ‘ostanovite pozhaluista,’ and the driver will come to a screeching halt.

For travelling long distances within the city or when your destination doesn't happen to be near a metro station, you may need to use a variety of transport types. The website spb.rusavtobus.ru (mostly available in English) gives you several routes when you enter your starting address and final destination.
Show on map