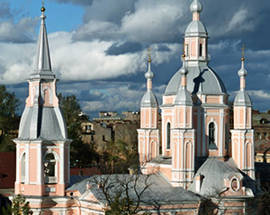 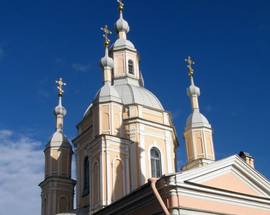 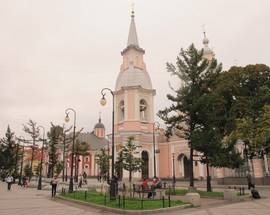 St. Andrew’s cathedral is the last of the Baroque churches to be built in St. Petersburg. Peter the Great himself commissioned the construction at this site in name of St. Andrew whom he considered his own personal protector. At first it was a primitive wooden structure, which would later burn to the ground after being struck by lightning. Redesigned in stone, the project was further delayed by the collapse of its cupola. As if that wasn’t enough violence, many of its valuables were confiscated by the Bolsheviks in 1924 despite the attempts of several hundred believers to protect the icons held inside and was closed down entirely in 1938, following the arrests of St. Andrew’s priests and the destruction of its bells.

The cathedral you can see today then had to undergo massive reconstruction following artillery damage done during World War II. To be fair, it did have defensive cannons mounted atop its dome at the time. It returned to the hands of the Russian Orthodox Church in 1992, complete with two 18th century icons of its namesake. Now a fully functioning place of worship, you can view services, light a prayer candle and view its famous iconostasis all at once.