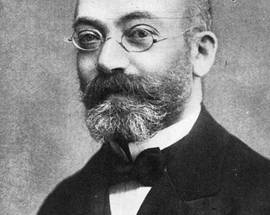 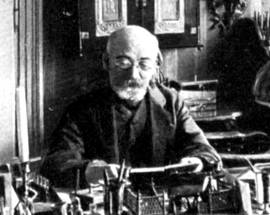 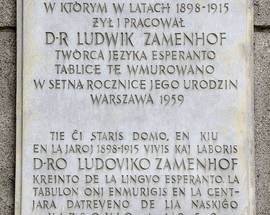 In addition to the revelation that the earth is not the centre of the universe (thank you, Copernicus), the theory of radioactivity (a nod to Marie Skłodowska-Curie) and the catalyst for the collapse of communism across Europe (Lech Wałęsa and co.), you can add the invention of Esperanto – the most widely spoken constructed international language (we thought it was Klingon) – to the long list of contributions Poles have made to our blessed world.

Developed by Dr. Ludovic Lazarus Zamenhof in the late 1870s/early 1880s, Esperanto was created as a communication tool that would foster peace and understanding between different ethnicities and nationalities. Born in Białystok to Lithuanian-Jewish parents in 1859, Zamenhof displayed an obvious propensity for languages from an early age, speaking both his father’s Russian and mother’s Yiddish natively, and soon achieving fluency in German (which his father taught for a living) and Polish which became the native language of his children. Later French, Latin, Greek, Hebrew and English were added to the list with his command of Italian, Spanish and Lithuanian not falling far behind.

Zamenhof’s interest in language and the obsession of his later work came not only from his parents, but primarily from the mixed cultural makeup of his native Białystok, which he explained in a letter from 1895: “In Białystok the inhabitants were divided into four distinct elements: Russians, Poles, Germans and Jews; each of those spoke their own language and looked on all others as enemies. In such a town a sensitive nature feels more acutely…the misery caused by language division and sees at every step that the diversity of languages is the first, or at least the most influential, basis for the separation of the human family into groups of enemies. …I often said to myself that when I grew up I would certainly destroy this evil.” And he certainly tried; Zamenhof published his Lingvo internacia. Antaŭparolo kaj plena lernolibro (International Language. Foreword And Complete Textbook) in Warsaw in 1887 under the pseudonym Doktoro Esperanto, which translates to “Doctor Hopeful” in his invented language. Esperanto quickly found a following, increasing in popularity over the next few decades, particularly in the Russian Empire and Eastern Europe before spreading west across the continent and to America as well as China and Japan. Zamenhof went on to translate many works into Esperanto including original prose and poetry and became a critic of the Zionist movement for its nationalist predisposition. He died in Warsaw in 1917 and is buried in an ornate mosaicked tomb in the city’s Jewish Cemetery on Okopowa Street.

Zamenhof's work was profoundly prophetic of the impending European conflict during which Esperantists were targeted by both the Nazis and Stalinists; Esperanto was even identified in Hitler’s Mein Kampf as a language that would be used by the ‘International Jewish Conspiracy’ when they achieved world domination. Zamenhof’s entire family was executed during the Holocaust, though Esperanto obviously survived and according to a 2015 census is spoken to varying degrees by 2 million people worldwide. Google even offers an Esperanto search portal and the Esperanto version of Wikipedia contained over 227,000 articles as of January 2015, making it the 32nd largest Wikipedia by measure of number of articles (and largest of any constructed language). A 2000 study conducted by a German institute compared the length of study time required by Francophone high school students to achieve comparable levels of language proficiency in four languages: German, 2000 hours; English, 1500 hours; Italian, 1000 hours; Esperanto, 150 hours. It’s a shame Polish wasn’t included in the study, as its astronomical rating would help validate the healthy number of Esperanto speakers in the country today.