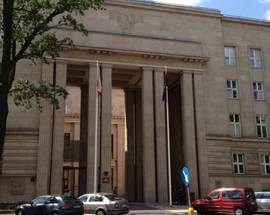 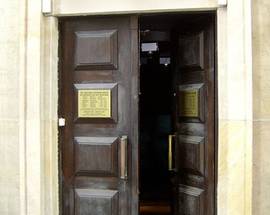 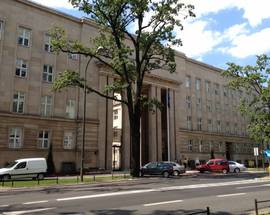 Every bit as disturbing as Pawiak is the former Gestapo HQ, found on Al. Szucha 25. Built between 1927 and 1930, the building's original purpose was to serve as a centre for religious beliefs. In 1939 it came under control of the Nazi regime, and for the next five years became one of the most feared addresses in Poland operating, among other capacities, as a brutal interrogation centre. The imposing building, currently housing the Ministry of Education, was left untouched by the carnage of war and now also holds a small but sobering museum within its bowels. Cells, where prisoners were held prior to interrogation, have been left largely as they were. Known as 'trams,' Poles would be sat on wooden benches facing the wall as they awaited their fate. Forbidden to eat or sleep, they were compelled to sit motionless in darkness, sometimes for days on end. Failure to do so would lead to almost certain death. The bullet marks scarring the walls tell their own harrowing story. Although the torture cells have long since been blocked off, the English language tape that the curator plays paints a vivid and repulsive picture. Prisoners were subjected to savage beatings, attacked with dogs and electrocuted. Those who didn't cooperate would, in some cases, be forced to watch their own families being tortured. The office where prisoners would have been 'checked in' also remains, complete with a faded portrait of Hitler and battered issues of Wehrmacht magazine lying around. Manacles, bullwhips and other sinister instruments can also be seen stacked on the bookshelf.

Al. Solidarności 62
/warsaw/museum-of-independence_18410v
Rather ironically, the museum that charts Poland’s struggle for freedom was home to the Lenin Museum during communist rule. Celebrating Polish patriotism, the museum covers all the key dates of Polish history, including the 1794 Kościuszko Uprising, t
see more

ul. Dzielna 24/26
/warsaw/pawiak-prison_18437v
Built in the 1830s to serve as a Tsarist prison, Pawiak came to the fore during WWII when it slipped into the hands of the Gestapo. During the Nazi occupation it became the largest political prison in Poland and saw over 100,000 inmates pass through i
see more

ul. Skazańców 25 (entrance from ul. Wybrzeże Gdyńskie)
/warsaw/the-warsaw-citadel_18415v
First off a tip. The entrance to the Citadel is on Wybrzeże Gdyńskie and is not that easy to find. Once you get there you discover a complex built in the wake of the 1830 November Insurrection, and commissioned by Tsar Nicholas I to s
see more

This place still has a repressive atmosphere. There are only 2 short hallways but lots of information is available. The displays are ominous. I found myself looking over my shoulder when I left.
Take your guide with you Download a pdf