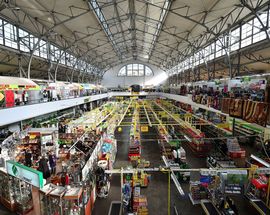 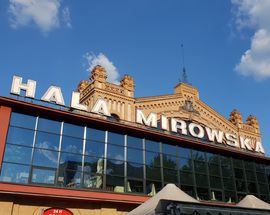 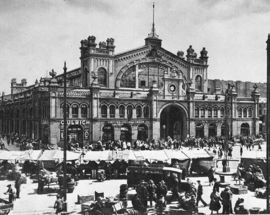 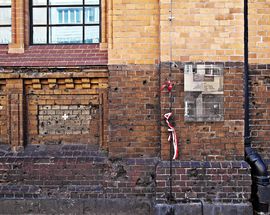 The giant Hala Mirowska is a major neighbourhood landmark consisting of two narrow brick halls (the other being its twin Hala Gwardii) constructed between 1899 and 1901 on the instruction of Russian mayor Nikolai Bibikov. It functioned as Warsaw’s largest market up until the outbreak of the Warsaw Uprising. Though ravaged by fire the walls refused to give way and the buildings survived – check out the bullet scars still all too visible on the corner of Pl. Mirowski and Jana Pawła II. Serving as a bus depot in the post-war years, the structure resumed its original purpose in the 1950s and today is notable for its flower stalls near the entrance, as well as lines of country folk selling jars of mushrooms out of the backs of their vans. Inside are a collection of small old school shops, however, it's the outdoor food market that draws in the locals owing to the fresh produce being sold here on a daily basis, brought straight to you from the countryside around Warsaw. The supermarkets simply can't compare to the quality you see here.

Plac Żelaznej Bramy 1
/warsaw/hala-gwardii_151600v
Re-opened to the public in September 2017 after years of lying empty, Hala Gwardii, the twin building of Hala Mirowska, has now returned to its pre-war roots and is
see more