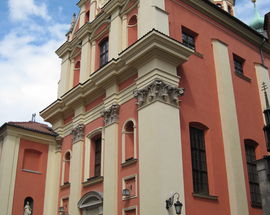 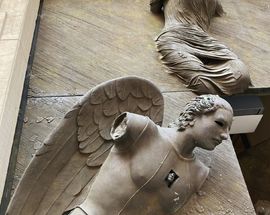 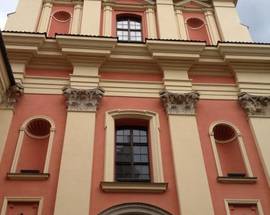 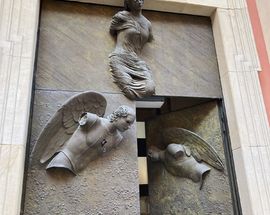 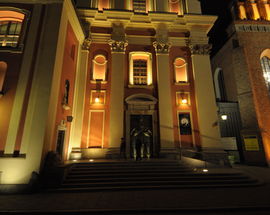 Built at the behest of King Zygmunt III Waza’s confessor, Piotr Skarga, this lovely little Renaissance church directly next to Warsaw Cathedral was constructed between 1609 and 1626 for the city’s Jesuit community. Having had something of a varied and colourful history to say the least, it suffered at the hands of the Swedes in the latter half of the 17th century, who looted it of its entire contents, and it even spent time as a storehouse during the Partitions. Also known as the Holy Mother of Grace Church after the city’s patron saint, the church was returned to the Jesuits at the end of WWI only to be destroyed by the Germans in 1944. Rebuilt between 1948 and 1957, the church is notable for its simplified Mannerist style and retains a few original elements - of particular interest is the 17th-century picture of the Holy Mother herself.

Today it's the spectacular front doors that actually attract the most attention. Designed by internationally renowned Polish sculptor Igor Mitoraj, the 4m bronze doors feature impressive classicist, but slyly post-modern bas relief sculptures of Mary (in the centre) and two angels (one on each opening door). Known as the 'Anielskie Drzwi' (Angelic Doors), they were installed in 2009.

The church crypt is sadly not open to visitors, but notably contains the remains of Prince Karol Ferdynand Waza and Maciej Kazimierz Sarbiewski (1595-1640), the Jesuit priest, poet and court preacher to King Władysław IV.

Absolutely stunning in it&#039;s simplicity & beauty. Visited on a cold Fri. night in April 2013. It was almost full for Mass at 7:30 with people of every age & class. It was a wonderfully warm & alive experience.
Take your guide with you Download a pdf