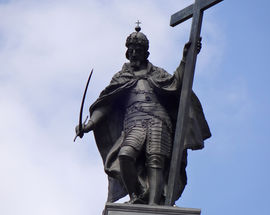 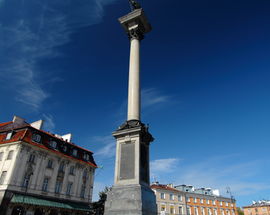 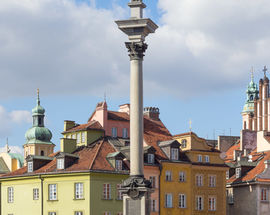 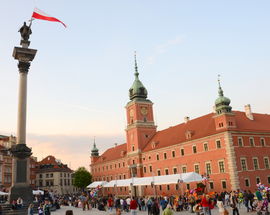 Built in honour of the man who moved the capital of Poland from Kraków to Warsaw - King Sigismund III Vasa - this column was erected way back in 1664 by Sigismund’s son, Władysław IV. Designed by Italian architects Augustyn Locci and Constantino Tencalla, and standing twenty-two metres high, local legend asserts that Sigismund rattles his sabre whenever Warsaw is in trouble, an occurrence first reported during the 1794 Kościuszko Uprising and again during WWII. With the Warsaw Uprising in full swing the column took a direct hit from a tank shell and came crashing down. Amazingly Sigismund survived, losing only his sword, and was returned to his new perch in 1949. The remains of the original column can be seen nearby beside the Royal Castle; touch them for good luck.

Pl. Zamkowy 4
featured
/warsaw/royal-castle_18450v
More a palace than a castle, this building is the pride of Warsaw, reconstructed from a pile of rubble at incredible cost between 1971 and 1984. Much of the furniture was donated by now dec
see more
Featured

Plac Zamkowy
/warsaw/plac-zamkowy_153446v
Most visits to the Old Town begin on Plac Zamkowy under King Sigismund’s Column. More of a triangle than a square, there isn’t a more popular meeting place in the city, and not a minute of the day when t
see more

ul. Senatorska 2
/warsaw/warszawski-sznyt_149218v
With possibly the best view of any restaurant in the city (Old town, Royal Castle and the Praga skyline!) this classy restaurant revives pre-war Warsaw grandeur and injects it with some thoroughly modern accents. With an open kitchen on both levels of th
see more