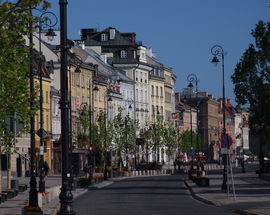 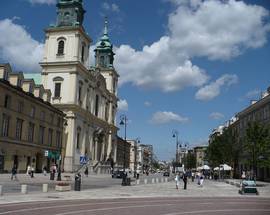 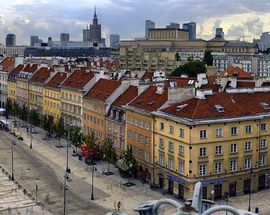 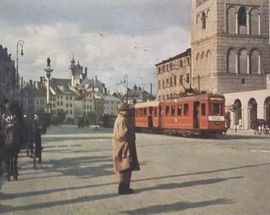 Krakowskie Przedmieście is easily one of Poland’s most prestigious and well-known streets, stretching from the Royal Castle (Pl. Zamkowy 4) in the Old Town until it blends into the famous ul. Nowy Świat. A natural starting-point for any stroll of this high street is the sabre-rattling King Sigismund’s Column, just outside the Royal Castle. This popular meeting point sees its steps visited by buskers, tourists and white-gowned brides in search of memorable snaps. From this point head to St. Anne’s Church (ul. Krakowskie Przedmieście 68), a neo-classical effort that survived the war but came within a whisker of collapse when work on the W-Z street tunnel in 1949 caused several landslides; it took a team of 400 workers two weeks to shore the foundations and stabilise the soil, but the real hero of the hour was Romuald Cebertowicz - a professor who invented a way of solidifying the soil via the use of electrical currents. The interior of St. Anne’s is fine, but the real reason for visiting is the viewing platform, which offers impressive views of the Old Town and a distant shot of the red and white National Stadium.

A short stroll will take you to the Adam Mickiewicz monument. This statue was erected in 1898 - the centenary of the birth of Poland’s best-loved bard. Unveiled at a time of Imperial Russian repression the very creation of his likeness was regarded as something of a bombshell, and over 12,000 patriotic Poles turned up to cheer the ribbon cutting. Standing behind Mr. Mickiewicz at no. 62 is a building where Fryderyk Chopin played a concert at the age of 13 (Now Chopin Point)!

Continuing, you’ll find the elegantly overhauled Bristol Hotel (ul. Krakowskie Przedmieście 42/44). A brass plaque boasts of its many famous guests: Picasso, Nixon and Dietrich, to name but a few. Across the street is the newly revamped Raffles Hotel Europejski - fun fact, it was here in 1967 The Rolling Stones stayed during their 1st visit to Poland, all under the watchful eye of the security services. Legend has it they very much enjoyed Polish vodka in the hotel bar... we'll leave it at that. Across the street again, the current building of the Ministry of Culture and Art (ul. Krakowskie Przedmieście 15) is also home to its own historical factoid - it was here that Napoleon met his paramour Marie Walewska at a ball held in his honour.

Going onward, you'll see the 17th century Church of the nuns of the visitation where Chopin attended in his youth, also playing on the impressive original organ as a student. Next door is one of the best examples of the classical style to be found in Poland, and another location connected to Chopin where he played his first public concert...

Stop for photos by the stone lions and stern looking guards outside the Presidential Palace. Construction on the palace began in 1643 at the behest of Stanisław Koniecpolski, although he died before it was completed. It passed into the hands of various aristocratic families and in the 18th century it became the famed venue for lavish society banquets - none being more extravagant than the party held to celebrate the coronation of Stanisław II August Poniatowski in 1789, when the astounding sum of over two million złoty was spent entertaining 4,000 guests. Some will say it was money well spent; Poniatowski proved to be one of Poland’s finest monarchs and the constitution of May 3, 1791, signed on these very grounds, is recognised as Europe’s first. When Poland regained independence in 1918 the reconstructed building was commandeered to serve as home to the Polish Prime Minister and his Council of Ministers. It saw more momentous events in 1955, this time when the Warsaw Pact – the Soviet Union’s answer to NATO – was ratified within its walls. In 1989 round table talks between the communists and the opposition were held here, paving the way for political freedom, and in 1994 it was appointed as the official home of the Polish President and is where current President Andrzej Duda and his family presently reside.

Going further, why all of a sudden do you see young, fresh faced kids? Well, you’re in Warsaw University-land. The Uni’s main campus lies behind the grand gateway at ul. Krakowskie Przedmieście 26/28. Dating from the 17th century the main building, known as ‘Villa Regia,’ was remodelled and renovated several times before Warsaw U was established here in 1819. Chopin even lived here, with plaques found at the entrance to the campus - look up at the building behind you to see another location he lived in! The uni had a tough time under Russian rule; closed in retaliation for the 1830-31 Uprising the university continued to operate underground, though by 1859 the Tsar calmed down enough to rubber stamp the creation of a School of Medicine. Today, with some 57,000 students on the roll call, the university stands out as the largest and arguably best in Poland. Notable alumni include former Israeli premier Yitzhak Shamir, writer Witold Gombrowicz, award-winning hack Ryszard Kapuściński, the late president Lech Kaczyński and poet Julian Tuwim.

Head across the street to visit the Church of the Holy Cross. This is the famed final resting place of Fryderyk Chopin’s heart, which was sealed in an urn at his own request and placed behind a tablet featuring his likeness, becoming a place of pilgrimage for his legions of fans. Finish your Krakowskie Przedmieście wander with a visit to the Nicolaus Copernicus monument, located opposite the church, appropriately seated in front of the Polish Academy of Sciences (ul. Nowy Świat 72). The monument was unveiled in 1830 and has seen plenty of action, particularly during WWII when the Nazis added a bronze plaque suggesting the astronomer was actually German. In 1942 a brave boy scout removed the plaque, causing the Nazis to remove the monument and bomb several others as retribution. Fortunately Copernicus was recovered and restored following the war. The controversial plaque is in the Museum of Warsaw.

ul. Krakowskie Przedmieście 42/44
featured
/warsaw/hotel-bristol-warsaw_17696v
Dating back to 1900 and designed in the Art Nouveau style, the Bristol was totally restored to its pre-communist era glory way back in 1993. The grand re-opening ceremony was attended by none other than Mrs. Thatcher and it was considered the classies
see more
Featured

Pl. Zamkowy 4
featured
/warsaw/royal-castle_18450v
More a palace than a castle, this building is the pride of Warsaw, reconstructed from a pile of rubble at incredible cost between 1971 and 1984. Much of the furniture was donated by now dec
see more
Featured

Church of the Assumption of the Virgin Mary and of St. Joseph

ul. Krakowskie Przedmieście 52/54
/warsaw/church-of-the-assumption-of-the-virgin-mary-and-of_120223v
Known more commonly as the Carmelite Church, this structure features a stunning neoclassical facade originally created in the 18th century. It features twin belfries and is most notable for being the site of
see more

ul. Krakowskie Przedmieście 34
/warsaw/church-of-the-nuns-of-the-visitation_60871v
Visit the church that Fryderyk Chopin attended in his youth by popping into this Baroque beauty. Pride of place goes to the original organ which our man hi
see more

Pl. Zamkowy
/warsaw/king-sigismunds-column_18402v
Built in honour of the man who moved the capital of Poland from Kraków to Warsaw - King Sigismund III Vasa
see more

ul. Królewska 2
/warsaw/lobster-house_168012v
The choice of seafood venues in Warsaw (and good quality seafood in Poland as a whole, for that matter) has steadily been increasing over the last decade or so, however, it still has a reputation as being exclusive and pricey (sometimes u
see more

ul. Krakowskie Przedmieście
/warsaw/nicolaus-copernicus-monument_18455v
The founder of modern astronomy. A sheltered academic, Copernicus made his observations a century before the invention of the telescope and without help or guidance. His book De Revolutionibus (1543) posited that the earth ro
see more

ul. Krakowskie Przedmieście 46/48
/warsaw/presidential-palace_37323v
If pre-war Warsaw was considered the Paris of the East, then Krakowskie Przedmieście would have been its Champs Elysees - its importance recognised by the number of palaces, institutions, monuments and churches that line it. Of those none is more impo
see more

ul. Krakowskie Przedmieście 13
/warsaw/raffles-europejski-warsaw_155136v
A hotel which was always known in Warsaw, being the first to re-open after World War II, and later entering Varsovian folklore with the visit in the 1960s of a certain group of young upstarts calling themselves 'The Rolling Stones'. Well
see more

ul. Krakowskie Przedmieście 68
/warsaw/st-annes-church-tower_18427v
St. Anne’s survived the war with a few token scratches and a collapsed roof, but what the Nazis failed to destroy was very nearly demolished by a team of incompetent builders - by 1949 the whole church threatened to come crashing to the ground. The th
see more