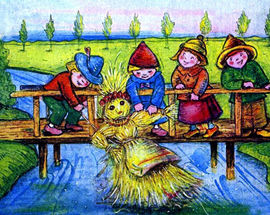 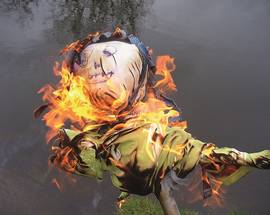 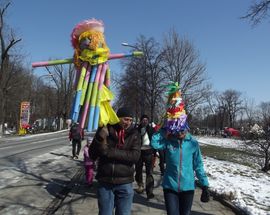 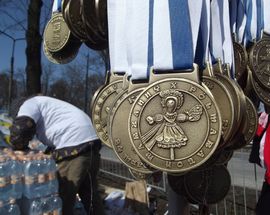 Despite the strong Catholic character of modern Poland, some pagan traditions have endured. One of the most blithely bizarre and eyebrow-raising is the spring equinox celebration known as the Drowning of Marzanna (Topienie Marzanny). Marzanna is the Polish incarnation of the old Slavic goddess of winter, plague and death. Fearing her icy grasp, the best way for superstitious Slavs to protect themselves, encourage the timely arrival of spring and ensure a good harvest was to partake in an old-fashioned witch-burning, followed by a drowning (just for good measure).

Dating back to medieval times, the seasonal rite involved making a Marzanna effigy out of straw and sticks, which was then wrapped in linen and gussied up with ribbons and beads. On the afternoon of March 21st - the first day of spring - young children would play with/torture the idol, gleefully parading it around and dunking it in every trough and water barrel in the village. At dusk the villagers would gather at the riverbank, setting the effigy ablaze and tossing it into the water, cheering as the blazing wench drifted downstream.

Satisfied that the witch was vanquished, her saturated corpse would then be retrieved and again paraded back through the village, becoming the focal point of dancing as singing as children even went door to door collecting small donations for their contribution to the public good. Most often associated with the regions of southern Poland - namely Upper Silesia (Śląsk), Małopolska and Podhale, as well as other western Slavic regions like Moravia, Bohemia, Lusatia, Southern Germany and Slovakia, today this tradition still survives, particularly in villages and rural areas.

In Kraków, in lieu of a full embrace of this slightly prickly tradition, the city has organised the Marzanna Half-marathon run on the weekend of the spring equinox since 2003, which sees colourful effigys among the runners and medals with Marzanna on them handed out to participants.

In Poland, many children still participate in the creation of a Marzanna doll, organised by their kindergarten or primary schools. Today colourful tissue paper, kitchen paper rolls and other recycled materials are often used. In order to teach contemporary kids the value of...uh...well, at any rate, under adult supervision, thank goodness, on March 21st, just as in centuries past, Marzanna is taken to the nearest riverbank or bridge, set ablaze and thrown to her watery grave as the children sing springtime and witch-burning songs.

As the spring sun rises in the sky of blue
in this swollen river we are drowning you!