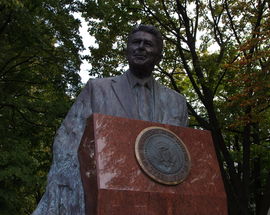 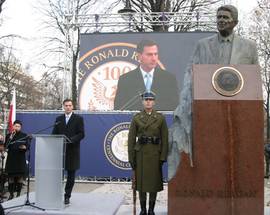 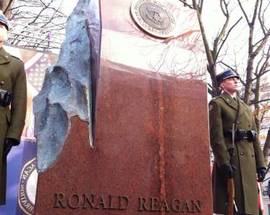 A large bronze statue of U.S. President Ronald Reagan now calls Warsaw home after an unveiling in November 2011 that included former Polish President and Solidarity leader Lech Wałęsa. The large 3.5-metre monument portrays Reagan, who was the 40th president of the United States and held office from 1981-1989, when he stood at a podium at Berlin’s Brandenburg gate and declared, “Mr. Gorbachev, tear down this wall,” back in 1987.

So why are the Poles using their valuable bronze on the Gipper? In Poland Reagan is considered one of the 20th century’s most important leaders thanks to his long-standing opposition to communism. During Reagan’s Christmas address in 1981 he cited the persecution of the Solidarity trade union by the country’s communist government as evidence that the regime was waging “war against its own people.” That holiday season candles were put in the windows of the White House to show Reagan’s support of the Solidarity movement and the Polish people.

Reagan’s continued policy of vigorously promoting democracy and condemning communism is credited as hastening the dissolution of the Soviet Union, and along with Pope John Paul II he was a strong supporter of Wałęsa’s campaign for presidency in 1990. During the unveiling ceremony Wałęsa noted his belief that without Reagan Poland wouldn’t be a free nation today. The statue, which was created by Polish sculptor Władysław Dudek, can be found across the street from the United States embassy.