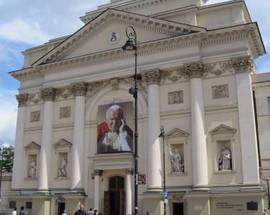 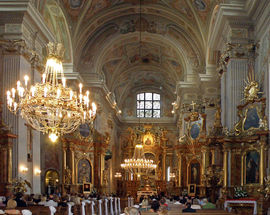 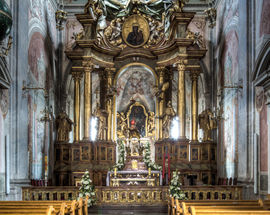 St. Anne’s survived the war with a few token scratches and a collapsed roof, but what the Nazis failed to destroy was very nearly demolished by a team of incompetent builders - by 1949 the whole church threatened to come crashing to the ground. The thoughtless construction of the nearby Trasa W-Z tunnel had led to several landslides, resulting in huge cracks appearing in the floor of the church. It took a team of 400 people two weeks of tireless work to stabilise the undersoil and shore up the foundations. Intriguingly, this wasn’t the first time St Anne’s had survived vicious conflict to find disaster around the corner. It escaped destruction during the war with Sweden (1650-1655) only to be gutted by fire two years later, apparently the victim of an arson attack. The classicist façade dates from 1788 and is the design of the royal architect Piotr Aigner. The interior holds even more classicist and rococo details. Certainly, however, the reason to visit is the splendid viewing tower, the views from which are worth the 147-step climb (open 10:00-18:00; Sat, Sun 11:00-18:00; admission 10/7zł).

One other point of interest concerns a simple wooden cross you will see in the Loreto Chapel inside. These two planks of wood became the focus of a battle that threatened to divide the country in the summer of 2010. To read the story behind that see our piece on the Presidential Cross.