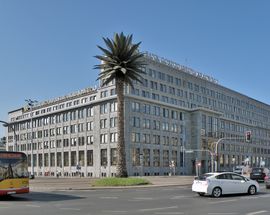 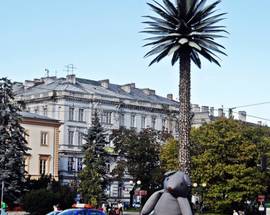 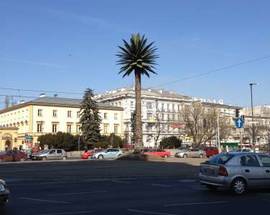 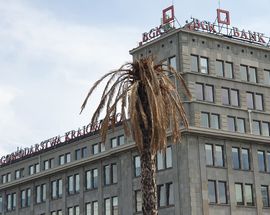 More observant visitors are at some stage going to come across a great big palm tree planted in the middle of a traffic island. So, what’s it all about eh? Standing on the intersection between Nowy Świat and Al. Jerozolimskie it’ll come as little surprise that it’s part of a modern art project, awarded the title of Greetings from Jerusalem. First off, the tree is not actually a tree, rather a steel column (specially designed so it can bend in the wind), covered with natural bark and leaves made from polyethylene. It’s the work of artist Joanna Rajkowska who, during a trip to Israel, was struck by the brainwave of sticking a palm tree up in Warsaw to add some sunny cheer. Manufactured in California the tree sent City Hall into a spin, its baffled bureaucrats not knowing what the devil to do with it. Eventually it was unveiled here to a curious Warsaw public on December 12, 2002. The populace liked this surprise Christmas present so much it became a permanent fixture, as well as the occasional sleeping habitat of returning clubbers too trollied to figure they haven’t stumbled on a desert oasis.

Aleje Jerozolimskie 33
/warsaw/aleje-jerozolimskie_41997v
Slicing central Warsaw in two is Aleje Jerozolimskie, an area first chronicled in 1774 when it was known as Nowa Jerozolima, a small village populated largely by Jews. The village didn’t last long, most of its population choosing to move into the capital
see more

Warsaw palm is one of the brightest points of this city. Many times I&#39;ve passed next to this tree, I was much happier :) The capital of Poland is really worth to see. Many museums, great restaurants and possibility to do a lot of activities there! Despite of problems with Internet access here (hopefully Polish WiFi helped me), I reccommend going to Warsaw even for just one day :)
Take your guide with you Download a pdf